What do we mean by blogging? 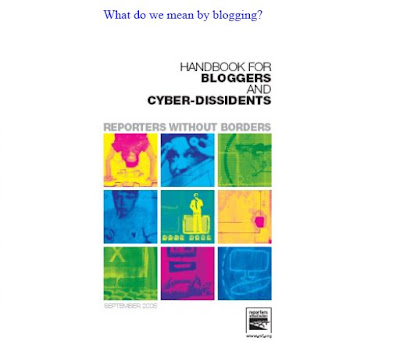 The handbook says that blogging has become a powerful tool of freedom of expression in the midst of other media. Blogs provide one, irrespective of educational or technical background, the opportunity to publish material. The handbook very well explains the meaning and purpose behind blogging. The handbook has enough resources for journalists who work from countries, where there exists authoritarian regimes. In fact in such countries, bloggers can serve the function of a press. The handbook finds that often blogging is done by real journalists in countries, where the mainstream media is censored or is under pressure. It has been informed that security is not the main concern for bloggers; rather finding an audience is the problem. But this is not true, of course, since it has been found by the Reporters Without Borders' Worldwide Press Freedom Index 2007 that in Malaysia, Thailand, Vietnam and Egypt bloggers were arrested and news websites were closed or made inaccessible during the year 2007. In fact, the present handbook is really worthy to go through in the midst of the crackdown on democratic institutions (including monks, bloggers, journalists, citizen journalists, students and activists) in Myanmar during 2007. The handbook explains in a layperson's language the need for choosing the best tool for blogging. The book informs that blog tools are programmes that are installed on a server, using scripts to run the site automatically and a database to store. One important chapter in the handbook is on how to set up and run a blog. Meanings of the terms like: administration log-in, dashboard, posting, trackbacks, RSS syndication etc, are provided in this handbook.

'Handbook for Bloggers and Cyber Dissidents' asks for ethics on the part of journalists who blog. It explains that the standard pillars of journalism are: thoroughness, accuracy, fairness, transparency and independence, which must be kept in mind, while blogging by the journalists. Personal biases, even unconscious one, should be avoided while blogging. In this handbook, one blogger has stated that he closely follows the growth of the online encyclopedia Wikipedia and the Creative Commons (CC) licenses. There are separate chapters in the handbook on subject specific issues, which have been written by various bloggers, who are situated in different parts of the world. There is one entire chapter dedicated to Internet censorship, which talks about China and other such nations, where there exists too much censorship and restrictions. This is definitely a bold step, altogether. According to the handbook, China had been one of the repressive regimes where there existed too much of restrictions on the free flow of knowledge, information and news. Unfortunately, the handbook fails to mention that China had been doing so because it wanted to put curbs on pornographic content, and on content which represents (political) dissent against the State (given the various kind of incidents, which took place in modern Chinese history, including the crackdown on students' uprising in Tiananmen Square, during 1989). Whenever, Western human rights groups have shown cases of human rights abuse in socialist, communist and other such restricted regimes, the counter-argument that was provided was that these countries have performed better than countries from South Asia and Sub Saharan Africa in terms of human development index, and even economic growth. In fact, such allegations of human right abuse are very much imperialistic in nature, which affects sovereignty, according to some. So, it is extremely difficult at this current juncture to judge whether countries (particularly the post-colonial ones, which got freedom and independence from their 'White masters' during the 20th century) which are performing better in terms of having democratic media, are also the ones which are performing better in terms of inclusive economic growth, good governance, and in fighting the scourge of poverty. By saying this, one is of course not undermining the importance of the Fourth Estate in a democratic country. In fact, democracy itself is in a nascent stage, and various nations are pursuing various forms of (democratic) governance. By simply saying that democracy is a way of life, one would be underestimating the complexities of democracy itself. Otherwise, not so many books would have been written on the subject 'Political Science'. Moreover, the term 'development', which is associated with democracy, has been questioned by many for being pro-Western, anti-traditional and top-down in nature; and those who propagate it are affected by White man's burden, some analysts claim. Lastly, it can be mentioned that it is indeed a pleasure to (t)read through this handbook!