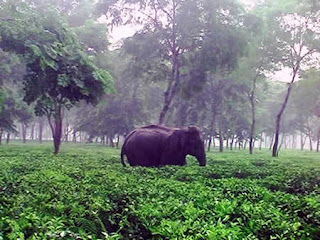 A few days before when Ganesh Chaturthi was celebrated across India, a new report titled: Gajah: Securing the Future for Elephants in India was released by the Elephant Task Force, Ministry of Environment and Forests. The Task Force in its report has estimated that the population of elephants found in the wild is over 26,000 in India. There are 3500 captive elephants, with ancient traditions of captive care. The male population of elephants has shown a decline vis-a-vis females that has led to sex ratios heavily skewed towards females. Large developmental and infrastructural projects are fragmenting elephant habitats, the report finds.

The land area occupied by elephants is estimated to be around 110,000 square km, which is composed of Protected Areas, Reserved and other categories of forests, plantations, agriculture, and non-forest areas, the report finds. The report informs that every year over 400 people lose their lives to elephants, and most of them are cultivators or labourers. However, the bad news is that more than half of the 100 elephants are killed every year so as to save standing crops in the fields. Since 1987, India has lost 150 elephants due to train hits.

The Task Force has expressed deep concern over the loss of habitats of elephants and the selective killing off of tuskers in key populations by ivory poachers. While the Task force in its report has praised the achievements of Project Elephant, which has been in existence since 1992, it has recommended for the creation of National Elephant Conservation Authority (NECA) on the lines of the structure for tiger conservation. A new Consortium of Elephant Research and Estimation (CERE) has also been recommended so as to develop and apply the best methods for enumeration. The Task Force has also recommended for scientific methods for elephant population monitoring and landscape assessment.

In order to reduce human-elephant conflicts, the report has asked for preparing Conflict Management Task Forces that would comprise of experienced foresters, scientists, wildlife vets and social scientists. It has recommended for mandatory taluka-level hearings at different times in the sowing and harvesting season in all conflict areas that can bring together affected citizens, officials and elected representatives.

The new Elephant Landscapes that are recommended by the Task Force are as follows:

The Task Force has also recommended to declare elephant as a National Heritage Animal, which will give it due place as emblem of ecological sensitivity.

Gajah: Securing the Future for Elephants in India, Elephant Task Force, Ministry of Environment and Forests,

Time for an elephantine effort, The Pioneer, 1 September, 2010,