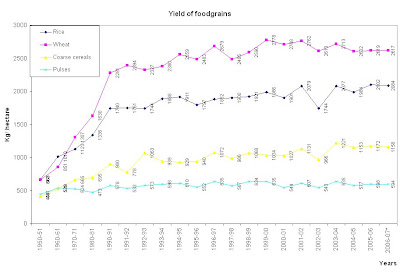 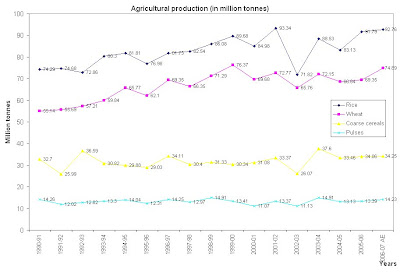 E-agriculture is about how ICTs (Information and Communication Technologies) can be used by the community of development practitioners (people from the government/s, NGOs, universities/schools/local bodies and donor agencies), scientists, farmers and other agencies in a modern institutional framework to share and manage knowledge and information (on agricultural practices, prices of commodities, soil condition and weather condition) in order to boost the growth of agriculture and allied activities for economic reasons. This is expected to improve the well-being, quality of life and income levels of those who are directly or indirectly depending on agriculture. In most of the developing and the third world nations, more than 60 percent of the working population derive its livelihoods, directly or indirectly, from agriculture and allied activities (which includes animal husbandry, dairy, forestry, fishing et al). The major constraints with developing countries’ agriculture is that it is traditional and subject to rain fed irrigation, apart from being subject to lack of investment, insufficient land reforms and rampant corruption. This is not to undermine the advantages of traditional agriculture over modern agriculture in the sense that the former is sustainable and more environment-friendly. However, with the advent of modern State adopting Green Revolution technology in various countries of the South, what has been found in reality are the lack of skills, storage facilities and marketing channels, which majority of the farmers suffer from. In this connection let us see the foodgrain production and yield per hectare in India (figures above).
Important initiatives in the area of e-agriculture are:
1. Geo-stationary satellites help us to forecast weather conditions, and perform GIS and MIS mapping. Initiatives by Government and private organizations in the spread of landline and mobile telephony are taking place thanks to the conducive atmosphere created particularly in India during the late 1980s that has helped the farmers in the rural hinterlands in communicating with the traders/ grain merchants, including their kith and kin.
2. With the aid of radio (including community radio) and televisions, farmers and peasants in the developing world of Africa and South Asia could be educated about modern farming practices. This is opposed to traditional system of farming when knowledge about farming practices (and alternative avenues of livelihood) used to trickle down from father to son, verbally/ orally.
3. Important ICTs related initiatives could help farmers in knowledge and information collection and processing pertaining to education, health and agriculture that will empower them in the long run. IT kiosks and telecentres in rural areas which are working in collaboration with local government and non-government bodies (comprising of development practitioners, and agencies, including rural banks and co-operatives) can help the agriculture-dependent communities in getting information on prices at which traders are ready to purchase food or non-food grains/ vegetables. Such telecentres also help in providing information on various government schemes pertaining to agriculture and rural development. They can help in e-registration (digitization) of land and housing records and village level agricultural production. Even RTI (right to information) forms, for ensuring transparency, can be filled digitally to check corruption pertaining to government-sponsored schemes in the area of agriculture and rural development. Information about prices and quality of inputs like fertilizers, seeds et al can also be accessed thru ICTs.
4. The importance of biotechnology and nano-technology [as a part of R&D by Government—Krishi Viswa Vidyalayas and private sectors] to improve agricultural productivity. Use of ICTs for storage, distribution et al.
5. ICTs can also be used for promoting organic farming and sustainable agriculture.

The technology revolution may be coming to poor countries via the mobile phone, not the personal computer, as it did in rich ones. In Africa, technology revolution is expected to happen with the same kind of entrepreneureal ethos as it happened with the creation of dotcom firms in the rich nations, but it will be tailored to suit local needs and in the area of mobile telephony. TradeNet, a software company based in Accra, Ghana, is planning to introduce a simple sort of eBay for agricultural products across a dozen countries in West Africa. It allows buyers and sellers indicate what they are seeking for and their contact information, which is sent to all relevant subscribers thru a SMS text message in any one of the four languages. Parties which are interested could then reach out to others directly to do a deal. Mobile-phone use in sub-Saharan Africa has increased in the recent past. A number of other mobile-phone market-places taking shape also started as aid projects. For e.g., Trade at Hand, a project funded by the United Nation's International Trade Centre in Geneva, provides daily price information for fruit and vegetable exports in Burkina Faso and Mali, with plans to reach out to more countries. Manobi, another telecoms firm, based in Senegal, provides real-time information on agricultural and fish prices to subscribers who pays fee, is also backed by aid money. But TradeNet's approach is different as it collects valuable economic data—names, locations, business interests and telephone numbers—and then sells them to the advertisers. The economic logic behind all such projects is reduced transaction costs, with more informed markets.
Source: The Economist
Accessed from:
http://www.economist.com/world/africa/displaystory.cfm?story_id=8597377)
---------------------------------------------------------------------------
In India, there have been efforts by institutions such as Indian Institute of Management, Ahmedabad, the World Bank, private organizations and individuals, to start up IT networks, which can help buyers and sellers (in retail businesses and elsewhere) to trade online, agri-goods and commodities. Such efforts also help in accessing information related to product quality, the place where it is grown and other useful information.
Similar efforts are being initiated in some of the African nations. The purpose behind introducing IT and ICTs in the developing nations is to reduce transaction costs in trading, and other official processes. IT also helps in stopping harassment of the poor people.
Posted by shambhu at 10:46 AM 1 comment: