Violence against women: An analysis 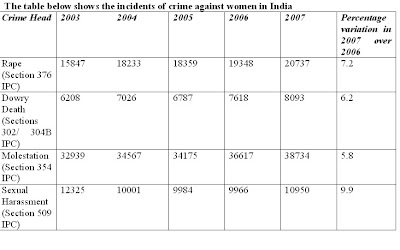 Any form of violence in the human society emanates from unequal power relations and the constant urge by the dominating party to control such relations so that they continue unabated without being challenged. Through the lens of gender, it is the men due to their ideological underpinnings (such as patriarchal mindset), who have control over the resources and even the “rules” that determines the distribution and possession of such resources. There exists sexual division of labour due to which women are exploited, physically, mentally as well as commercially. Violence is used as a weapon to control the very male-oriented and dogmatic ideology governing the system that identifies women merely as care-givers, reproductive machines and sexual tools.

Sons are believed to carry forward the lineage. This is one reason behind high fertility rate in India. More investment on the education of sons is done compared to that on daughters. Within the household, there exists gender discrimination, which determines intra-household distribution of food. Due to lower educational levels, women’s capacity to earn shrinks. Malnutrition among adolescent girls and women is quite prevalent in India.

Women from upper castes are seldom allowed to work outside the home since it is considered as a prestige issue. That is why in India, we find work participation of women to be lower than that of men. However, work participation rate among low caste women is better compared to that among upper caste women. Honour killings are quite common in Haryana and Tamil Nadu when young girls marry somebody outside their caste and clan (also known as ‘khap’ in Jat community of Haryana) against their families’ consent.

Dowry is demanded from the husband’s side (in-laws) when younger women get married. Newly married women become subject to verbal and physical abuse. In many cases, young brides are burnt to death by the in-laws when their parents fail to meet the requisite dowry demanded by the in-laws. Female chastity and virginity is considered as a great virtue and it also determines women’s fate in their husband’s house. Abortion cases are quite frequent in India when the case arises to prevent unwanted pregnancy. However, very little is discussed about the trauma and anxiety associated with abortion, which women undergo. During menstrual cycles, women are asked to stay away from public places and religious ceremonies since they are considered impure during 'those' days.

Female bodies are like guinea pigs and have often been utilized for experimentation when it comes to family planning. Contraceptives meant to lower fertility are promoted by the government at the behest of the MNCs and the corporate sector without thinking about the consequences on health. Sexuality of women is controlled by the State and the men through traditions, beliefs and dominant cultural practices. Population control and family planning gets blindly associated with women’s welfare rather than being linked with the much criticized Malthusian doctrine.

Data on violence against women

In a country like India, it is difficult to rely on statistics pertaining to rape cases. The data may show that such crimes being committed may be going up or down. But in reality, women are afraid of even lodging FIRs (first information reports) in police stations despite being raped or sexually harassed. The judiciary and the legal system have been blamed time and again to be biased towards men. Cases of violence against women are often under-reported.

The number of rape cases has increased by nearly ten folds from 2487 in 1953 to 20737 in 2007. Young girls also become victims of child abuse at the hands of their closest male relatives and neighbours. When such crimes are committed, victims seldom protest due to the fear of social stigma.

When women protest against their exploitation, all methods are tried so as to control them including their voice. For example, Bhanwari Devi, the 'sathin' from Rajasthan, was gang-raped for working against child marriage practiced by the upper castes in her village.

According to the latest data from NCRB, respect for women seems to be the worst in Andhra Pradesh, which accounted for 83.5 per cent of cases under Indecent Representation of Women (Prohibition) Act of total cases across the country. The NCRB data clearly points that in 92.5% cases of rape, the offender was known to the victim. In fact, nearly 7.5% of offenders are relatives. Another disturbing aspect was that about a quarter of the rape victims are minors i.e. below 18 years of age.

What can be done?

During the Fourth World Conference on Women held in Beijing in September 1995, the United Nations Secretary-General, Boutros Boutros-Ghali, said that violence against women is a universal problem that must be universally condemned. The United Nations has termed violence against women as a gross violation of human rights. In India, a survey showed that for each incidence of violence, women lost an average of 7 working days.

Media that includes television, radio and newspapers can play a positive role in creating awareness about the pitfalls of violence against women. Mass media’s power should not be undermined by our policy makers.