Playing with the Mahatma Gandhi NREGA! 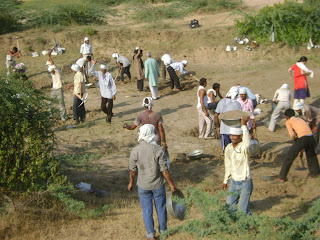 The Times of India dated 2 February, 2010 (New Delhi edition, page no. 17) carried a full page DAVP (Directorate of Advertising and Visual Publicity, Reference no.: davp35101/13/0015/0910) advertisement on the Mahatma Gandhi NREGA Sammelan. One of the achievements as claimed by the advertisement was: ‘Real Wages raised to Rs. 100 per day’. Going by the definition of real wages, one knows that it is earnings that are deflated by a price index so as to provide the inflation-adjusted purchasing power of the nominal wage. Instead of putting the term 'nominal wages' or simply 'wages', the Ministry of Rural development sponsored advertisement preferred to use the term 'real wages' But this gives us a false impression about the earnings of manual unskilled labourers who are employed for 100 days (in a year) under the NREGS. The advertisement simply wants to take away from our memory and perhaps, from our rationale that just a few weeks back India's annual food inflation based on wholesale prices rose to 17.4% for the week ended January 16 from 16.81% the week before. The World Economic Situation and Prospects (WESP) 2010 data shows that annual price inflation in consumer prices almost touched 10 percent in 2009 and 2010 in India. In the face of high inflation in food, a hike of nominal wages to Rs. 100/- per day is like a tiny drop of water in the ocean. Unfortunately, the Government does not understand this.

The other claims (Highlights) made by the ToI advertisement (dated 2 February, 2010, New Delhi edition) were:

· Allocation of funds for the current year raised to Rs. 39,100 crores

We all know that advertisements are meant to promote brands and communicate about a product to the potential customers. Their objective is to attract and tap the consumers so that they buy a product or a service with a sense of satisfaction despite spending money from their wallets. One may notice that for quite sometime advertisements on government schemes that are being publicized and funded by various ministries carry in them the photographs of the national and state-level leaders hailing from the top echelons of the ruling political party or coalition. Clearly, the hidden agenda is to woo potential voters in the name of development and welfare so that they vote in favour of such political leaders or a particular political party in the forthcoming elections. However, one may ask how tax payers’ money can be utilized for propaganda of a handful of political leaders. What about public accountability?

The advertisement that appeared in The Times Of India on 2 February, 2010 had the same purpose though it was meant to communicate to the people of India about the Mahatma Gandhi NREGA Sammelan. It appears like the ghost of ‘paid news’ haunting the Indian newspaper readers again and again in various shapes, colors and printed words.

But was it the case that Mahatma Gandhi NREGA Sammelan became a grand event? Not at all. The article titled 'Jean Dreze, Aruna Roy keep off sammelan', which has been written by K Balchand and that appeared in The Hindu on 3 February, 2010 tells us that two of the main brains i.e. Aruna Roy and Jean Dreze behind NREGA chose to stay away from the sammelan as they found that Central Employment Guarantee Council (CEGC) — governing body for the Mahatma Gandhi NREGS has not been allowed to function properly. These two persons have grievances against the way NREGA is being implemented that may convert the labour intensive scheme into a labour displacing one. By simply adding the name of the Father of the Nation cannot transform the NREGS into a foolproof and efficient government scheme.

Food inflation at 19.8% as pulses, potatoes jump, The Times of India, 1 January, 2010,
http://timesofindia.indiatimes.com/biz/india-business/Food-inflation-at-198-as-pulses-potatoes-jump/articleshow/5400513.cms

NREGS under scanner in Bhilwara, The Hindu, 10 October, 2009,
http://beta.thehindu.com/news/states/other-states/article31998.ece