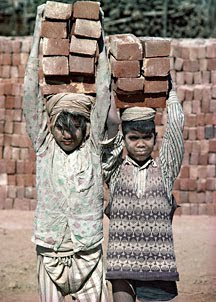 India has the largest population of child labourers in the world. According to statistics provided by non governmental organizations (NGOs), roughly 60 million children are working as child labourers. According to the official estimates of Census 2001, there were 12.7 million economically active children in the age-group of 5-14 years. The number used to be 11.3 million during 1991.

Most of the child labourers in India belong to the social groups Scheduled Tribes (STs), Scheduled Castes (SCs) and Other Backward Classes (OBCs). A significant chunk of child labourers are minorities. They are recruited for reducing costs of production and because of their inherent weakness to unionize for bargaining better wages, improved work conditions and related labour rights. That is why we have the paradox of having a large pool of child labour amidst high level of adult unemployment.

Works that needs dexterity is often done by them. Labour recruiters often get child labourers from poverty stricken areas and those areas that have undergone droughts and floods or where agriculture has failed. It is a well established fact now that trafficking of women and children is quite prevalent in this part of the world.

Child labour is considered as the denial of human dignity and freedom. That is why there is demand for use and sale of fair trade products (instead of free trade products), in whose manufacturing child labour hasn’t been absorbed. The Child Labour (Prohibition and Regulation) Act 1986 prohibits child labour in certain occupations and processes alone and their conditions of work are regulated in the rest.

The NSSO results also show that the total number of child workers declined from 13.3 million in 1993-94 to 8.6 million in 2004-05. They constituted about 6.2 percent of children in the age group 5-14 years in 1993-94 and 3.4 percent in 2004-05. The majority of the child labourers are located in the rural areas (7 million) where about two-thirds of the children were engaged in family enterprises as helpers and the remaining one-third were engaged as paid workers. In the urban areas, on the other hand, nearly 50 percent of the child labourers were found as wage workers. Some common causes of child labor are poverty, parental illiteracy, social apathy, ignorance, lack of education and exposure, exploitation of cheap and unorganized labor.

In India, exploitation of little children for cheap labor is an accepted practice (and norm) and is perceived by the local population as a necessity to earn livelihoods. Child labourers engaged in carpet weaving industries are paid poorly and they work for long hours in unhygienic conditions. Children working in such units are mainly migrant workers from Northern India, who are sent here by their families to earn some money and send it back to them. Their families dependence on their income, forces them to endure the onerous work conditions in the carpet factories.

However, there are some myths surrounding the association between poverty, incidence of child labour and school attendance. If one can remember, the Public Report on Basic Education (PROBE) survey was conducted in late 1996 in 188 randomly-selected villages of states of Bihar, Madhya Pradesh, Rajasthan and Uttar Pradesh. These four states account for more than half of India's out-of-school children. Aside from surveying all the schooling facilities in the sample villages, the PROBE team interviewed 1,221 households. The PROBE survey challenges several myths about the causes of educational deprivation in rural India. The survey exposed the myth that elementary education in India is free, that Indian parents have little interest in education and that economic dependence on child labour is the main reason why poor families are unable to send their children to school.

The PROBE survey found that an overwhelming majority of parents, even those amidst the deprived sections of the population, attach great importance to the education of their children. Sending a child to school on a regular basis requires a good deal of parental effort (not only due to the significant costs involved but also in terms of the time and attention required to ensure the child's sustained attendance and progress), and that the poor quality of the schooling system often discourages parents from making that effort.

Recently, the Pratichi Trust (India) has come out with a useful report on the state of primary education in parts of West Bengal. It has been found that the burden of curricula is making the way for private tuitions. Class divisions exist in getting access to education.

Primary Schooling by Amartya Sen, The Telegraph, 19 and 20 December, 2009,
http://telegraphindia.com/archives/archive.html