Banker to the Poor: The Story of the Grameen Bank 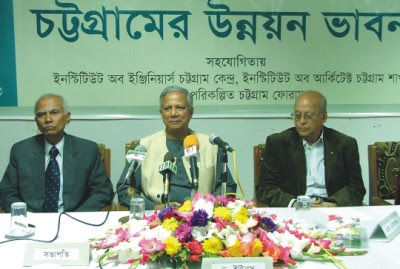 'It's not people who aren't credit-worthy. It's banks that aren't people-worthy'

Banker to the Poor: The Story of the Grameen Bank is an autobiography written by the founder of Grameen Bank, Prof. Muhammad Yunus, who received considerable amount of appreciation from all over the world because of his innovative way of using micro-credit for alleviation of poverty and generating livelihood security. Even the US First Lady Hillary Clinton made her remark, by saying, "By giving poor people the power to help themselves, Prof. Yunus has offered them something far more valuable than a plate of food. He has offered them security in its most fundamental form". The winner of the Nobel Peace Prize in 2006, Prof. Yunus set up the Grameen Bank in Bangladesh in order to lend small amount of loans to the poorest of the poor, who were earlier shunned by ordinary banks. Besides the Bank, Grameen has gotten involved with health insurance, handlooms, fishery and phone services, making it one of the interesting conglomerates currently, which is competing in the corporate world. Against the advice of banks and government, Yunus carried on giving out 'micro-loans' since 1974, and in 1983 formed the Grameen Bank, which is founded on the principles of trust and solidarity. Alan Jolis who is the co-author of the book Banker to the Poor, is an American journalist and writer, now living in Sweden. The book Banker to the Poor is an inspiring memoir of the birth of micro-credit, written in a conversational tone that makes it both moving and enjoyable to read. The book provides a background history of how Bangladesh's terrible 1974 famine underlined the need to enable its victims to grow more food; of overcoming criticism in many governments and in traditional economic thinking; and of how micro-credit was extended into credit unions in the West. Prof. Yunus' dream is to totally eradicate poverty from the world, and in this book he explains how it can be done. In 1976, he began visiting the poorest households in Jobra, Bangladesh in order to see if he could help them directly. There were three parts to the village: a Muslim, a Hindu, and a Buddhist section. When he visited the Buddhist section, he would often take one of his students, Dipal Chandra Barua, a native of the Buddhist section, along with him. Otherwise, a colleague, Professor HI Latifee, would usually accompany him. He knew most of the families and had a natural talent for making villagers feel at ease. That is how Prof. Yunus started by lending money to basket weavers, who were women and this activity later expanded to become the Grameen Bank. But when he started his work amidst poor people, he also faced opposition from the official machinery, Yunus writes.

Prof. Yunus started the Grameen Bank in 1983 with the avowed intention of turning banking practice on its head and lending to the poorest of the poor. In June 2007 the Grameen Bank had 7.21 million borrowers, 97 per cent of whom are women who managed a repayment rate of 98.61 percent.

In this autobiographical book, Prof. Yunus provides his background and throws light upon his work towards creation and direction of the Grameen Foundation. He was born in the year 1940 in Chittagong, a seaport which is situated in Bangladesh. The third of fourteen children, five of whom died in infancy, he was educated at Dhaka University, Bangladesh and was awarded a Fulbright scholarship to study economics at Vanderbilt University. In 1972, Yunus became the head of the Department of Economics at Chittagong University, which was also the year when Bangladesh faced domestic problems. Prof Yunus also explains how the money which is provided by the Grameen Bank would enable poor women to set up the smallest village enterprise and thus, pull themselves out of poverty. He also writes how collateral free loans help poor women to stay away from village-level moneylenders. Most of the loans provided by Grameen Bank go to poor women, and it is said that since its inception, there has been an astonishing loan repayment rate of over 98 percent. Kudos to a person like Prof. Yunus who has pioneered such an attempt to help the poorest of the poor.

The image has been taken from:

Hello Everybody,
My name is Ahmad Asnul Brunei, I contacted Mr Osman Loan Firm for a business loan amount of $250,000, Then i was told about the step of approving my requested loan amount, after taking the risk again because i was so much desperate of setting up a business to my greatest surprise, the loan amount was credited to my bank account within 24 banking hours without any stress of getting my loan. I was surprise because i was first fall a victim of scam! If you are interested of securing any loan amount & you are located in any country, I'll advise you can contact Mr Osman Loan Firm via email osmanloanserves@gmail.com