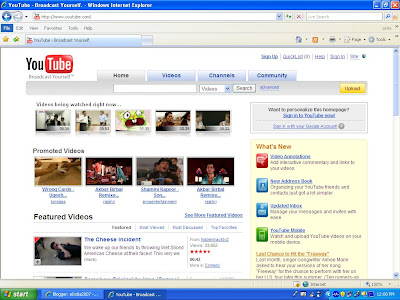 The latest technology to have made much dent on the minds of young people, both in the West and the East, is the 'YouTube'. 'YouTube' is basically a website known for uploading, viewing and sharing video clips. It came into being in 2005, thanks to the efforts of three former PayPal employees. 'YouTube's' playback technology is based on Macromedia's Flash Player 7, and it utilizes the Sorenson Spark H.263 video codec. It is a platform for posting and sharing videos/ video-clips/ films, which is free, provided one is registered with the website. It has been found that videos on 'YouTube' generally stream smoothly, without lags or slowdowns. The mobile site of 'YouTube' titled 'YouTube Mobile' came into being on 15 June, 2007. Although there are allegations against 'YouTube' regarding copyright violations, and the kind of content which is posted, 'YouTube' nowadays is also used in a positive fashion. It is now clear that the uploading of pornography or videos containing nudity is not allowed in the 'YouTube'. 'YouTube' does not allow anybody to upload content, which is not permitted by the copyright law of the United States. Like the Internet and blogs, 'YouTube' has also faced censorships and bans by various national governments all across the globe, owing to the threat it poses to states in terms of security, morality and ethics. There are allegations against 'YouTube' for hosting videos of real-life animal cruelty. 'YouTube' has also been used in few countries by students to bully. Hence, YouTube is a platform to post and share videos which can be animation, footage of public events or personal recordings of friends, provided the content is not offensive or illegal. YouTube since its inception had been useful for journalists, film-makers and even politicians, apart from the ordinary 'netizens'. It is argued by some that 'YouTube' is an outlet for creativity of creative people.

During the United Nations Internet Governance Forum, which was held at Rio de Janeiro, Brazil in November, 2007, there was discussions on the pros and cons associated with the Internet and new media. It has been observed by some during the Forum that “Web 2.0”–the second generation of web-based communities and hosted services–would bring less, and not more, democracy. User-generated sites like 'Facebook', 'Wikipedia' and 'YouTube' have not benefited the talented. In fact, profits (read 'supernormal' profits) incurred/ generated was not going to the creators of content, but to a tiny corporate minority. There are also allegations that the Internet is responsible for trivializing politics by helping to create a “cacophony of opinions, where one cannot sort out the truth.” Hence, there is the need for media literacy and healthy scepticism in order to judge and assess the growth and impact of the new media, the Internet and interactive websites like the 'YouTube'. A really important argument, which can be provided here is that the existing 'digital divide', would not allow the common man to utilize and maneuver the new technologies and the new media. The point is to govern and move the technology in a decentralized manner, and not letting the technology govern and shape the progress of the human race. For example, nowadays, if one logs on to 'YouTube', then one can now watch classroom lectures being delivered by professors from various universities such as the University of California at Berkeley, University of Harvard etc. 'YouTube' has served the student community by bringing higher education within the ambit of the web. 'YouTube' can thus be used for imparting visual and virtual literacy. In another way, 'YouTube' has proven itself to be something worthy and serious. 'YouTube' is now considered as a website, which provides real substantial, useful interactive content. 'YouTube's' higher education initiative, as have been exemplified earlier, works as a marketing tool to help strengthen alumni ties, and expand community outreach. Through the YouTube, young film makers can now market their documentaries and films, too. Although 'YouTube' provide some hope and space in the era of globalisation, but there still exists voices to look at this new medium critically. One can do a thorough research on 'YouTube', by seeing its impact on gender relations in a patriarchal society in India, in this respect. By simply, projecting 'YouTube' as 'the' best technology, which is available, would be to neglect the real issue. There exists alternative forms of expressing one's talent. There exists alternative platforms for expressing creativity such as street theaters, jatras (another form of traditional drama, which exists in Bengal, India), bahoorupis (artists) performing in front of the rural folks, Kalighat paintings (another form of traditional painting/ art, which came into being in Bengal during the 19th Century) etc. In the backdrop of emerging technologies like 'YouTube', it is essential to know whether such old art forms will die out or remain intact. In fact, one can add that platforms like 'YouTube' itself can be used to promote old
(folk) art forms by creative and young artists and film-makers. Unfortunately, not much effort has been made in this direction.

The present article would look void if the concept of 'new media and development' is not mentioned. What one means by “old” media are: print newspapers and magazines, which are static representations of text and graphics. Print media still exists as a powerful Fourth Estate in modern democracies. However, till the 1980s, media relied only on print and analog models. With the advent of the Internet and digital computers, new media came into being. New media includes: Web sites including brochureware, audio and video, chat rooms, e-mail, online communities, Web advertising, DVD and CD-ROM media, virtual reality environments, integration of digital data with the telephone such as Internet telephony, digital cameras, podcasting, digital satellite television, video podcasting, blogs, wikis, Web 2.0, hypertext fiction, graphical user interfaces, software and hardware, digital libraries, electronic journals, and mobile computing. Under the scope of new media data communication is happening between desktop and laptop computers and handheld devices such as PDAs, and the media they take data from, such as compact discs and floppy disks. Even old media nowadays rely on the new media. Internet is considered as the prominent example of media convergence. New media is making impact on the day-to-day lives of individuals since it is interactive, improves the speed of communication, and cuts back geographical distance to zero. The Internet has replaced the 'one to many model' of traditional mass communication with the possibility of a 'many to many' web of communication. In the knowledge era, the new media is believed to have turned the world into a global village. According to some, the creation of new media and technology is because of various complex factors such as: scientific discovery, technical innovation, and social applications. New media has originated due to the convergence of the media and technology. There are various issues before it such as intellectual property rights (IPR), proprietary rights versus open access, ethical and moral interventions, transfer of technology, etc.