Agriculture–Pathways to Prosperity in Asia and the Pacific 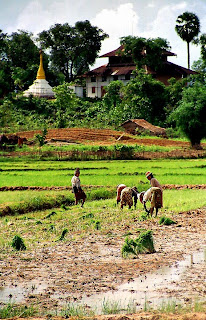 Almost 4 months after the Rural Poverty Report 2011 was released, a newly published report from IFAD concentrates on rural poverty and agriculture in Asia and the Pacific region. The reason behind this increased attention on this part of the world may be that more than 680 million people in the Asia-Pacific region still continues to live on less than $1.25 a day, and 70 per cent of them reside in Bangladesh, India, Nepal and Pakistan. This has been observed by the report titled Agriculture–Pathways to Prosperity in Asia and the Pacific, March 2011. Most of the poor from this region are either landless or own a limited piece of land, possess large families, are less educated and have limited access to credit and technology.

The IFAD report shows that intensity of multidimensional poverty (MPI) is highest in South Asia, which houses 29.5 percent of global population, but has 51 per cent of the world’s multi-dimensionally poor. India, Bangladesh, Nepal and Pakistan have high MPIs in South Asia. 51 per cent of the population in Pakistan, 58 per cent in Bangladesh, 55 per cent in India, and 65 per cent of population in Nepal are MPI poor. Living standard has the highest contribution to poverty in India, Bangladesh and Nepal. Deprivation rates in health parameters are found high in Pakistan and Nepal. Deprivation in terms of nutrition is high in Nepal and India. China has only 13 per cent of the population that is MPI poor, while Thailand has only 0.8 per cent. India, Afghanistan and Bangladesh have close to 50 per cent of rural children who are undernourished.

Almost 70 percent of poor live in rural areas of Asia and they depend on agriculture for their livelihood. In South Asia, about 80 per cent of the poverty remains a rural problem despite rapid industrialization and economic growth, according to the report titled Agriculture–Pathways to Prosperity in Asia and the Pacific.

The IFAD report mentions some of the shocks that erode poor people's assets and capabilities such as: natural disasters, climate change, pest outbreaks (e.g. avian influenza), vulnerability to food price fluctuations, illness, and death. It explains some of the risk-coping mechanisms households usually undertake in the face of poverty for e.g. selling productive assets, borrowing, depleting savings, migrating, and reducing expenditure on food, healthcare and education (notably affecting women and children).

There exist gender inequalities in education, economic opportunities, wages and nature and extent of work, according to the IFAD report. A study in West Bengal shows that among women who had taken loans for income-generating activities, only 5 per cent reported having total autonomous control over the money; 56 per cent reported that they share control over the loan money with their husbands; and 38 per cent reported that their husbands have sole control over the proceeds of the loan. Women’s share in non-agricultural wage employment remains low, particularly in South Asia. For India, it is estimated that 55 per cent of the wage gap between men and women cannot be explained by productivity and endowments, which suggests the presence of systematic gender-based discrimination in pay.

The decline in the proportion of people living in rural areas between the period 2000-04 and 2005-09 has been more prominent in East Asia and South East Asia as compared to Central Asia and South Asia. The IFAD report suggests that rural population in Asia and the Pacific region is likely to peak in 2014, with the total numbering 2400 million, which would decline thereafter. The contribution of agricultural value added to GDP is low in the entire region, and declined marginally between 2000-04 and 2005-09 for South East Asia and Pacific Island, and, more significantly in East, South and Central Asia. South Asia (31 percent) has seen lowest growth in per capita income between 2000-04 and 2005-09 as compared to East Asia (64 percent) and Central Asia (43 percent).

The report finds that usage of ICTs helped farmers in terms of knowing prices of agricultural commodities or weather conditions for e.g. SEWA (India) performs this service for women and ITC’s e-choupal (India) uses SMS to inform small producers. In India, the number of self-help groups linked to banks has increased from about 500 in the early 1990s to more than 3 million in 2008. The Indian Dairy Cooperatives network comprises 12 million members, including landless labourers and women, and produces 22 per cent of India’s milk supply. In order to increase the welfare of migrants, Rajasthan introduced mobile ration cards for its them, while Orissa and Madhya Pradesh introduced improvements in the safety and efficiency of remittances.

The report finds that diversification of agriculture into livestock and aquaculture has added to increased prosperity and food security in China, Vietnam, Sri Lanka, Laos and Philippines. It finds that the linkage between agricultural (rural) and industry (mainly around urban centres) remained weak in major South Asian countries except China and Vietnam. In India during the process of economic transition, not enough movement of labour took place from agriculture to industry. On average, rural non-farm income (RNFY) constitutes roughly 50 per cent of rural household income in Asia and the Pacific Region, of which 40 per cent comes from local non-farm business and employment and the remaining from transfers and remittances. Due to paucity of human, financial and physical capital, the poor households often remain confined to the low-productivity non-farm activities, which trap them in poverty. Gender, caste and social status determine one's participation in non-farm jobs. Evidence suggests that each dollar of additional value added in agriculture generates USD 0.6 to USD 0.8 of additional rural nonfarm economy’s income in Asia and the Pacific Region. Based on state level time series data for India covering the period 1971-72 to 1983-84, it has been found that expansion of casual non-farm employment is strongly correlated with growth in agricultural wages.

Key findings of the report:

Agriculture–Pathways to Prosperity in Asia and the Pacific by the IFAD, March 2011, http://www.ifad.org/pub/apr/pathways.pdf