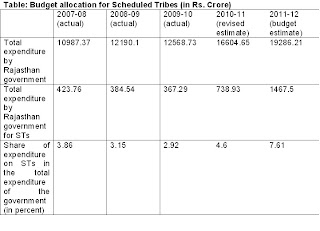 RD Vyas informed that in Udaipur last year, a meeting of civil society organizations working among tribals was held. Major issues related to tribals were discussed like: NREGA, education, corruption, Forest rights etc. Most tribal areas in Rajasthan are backward and poor. Basic problems faced by the tribal population are: access to health care, livelihood security, Right to Land etc. which are yet to be solved. The Forest Rights Act could not be implemented effectively. Land acquisition by the government, the private sector and the land mafia is quite common. Majority of the tribal population is illiterate. The existing Panchayati Raj system is a failure in the tribal areas. The Panchayats (Extension to the Scheduled Areas) Act, 1996 could not be implemented properly. Information regarding land acquisition is not passed to the gram sabhas or villages, which violates the PESA Act.

Badki Bai from Jharol said that PESA, which is meant for the poor, is not working properly in her village. Punni Bai from Abu Road informed that tribal people do not have access to forest produce. Despite the PESA law, the gram sabha has got no control over local resources. Gram sabha’s voice is not heard by the administration. It is the corporate sector which enjoys full control of the local produce thus depriving the tribals.

On Forest Rights Act, Suresh ji from Bara district told that at his village the Van Adhikar Samity has got no proper information and training. Total number of plots distributed under the Forest Rights Act on application was quite low. Sawaramji from Abu Road said that a few plots got distributed on application. Size of the plots distributed was quite small as compared to the size of the land, which was originally cultivated. Forest department still continue to enjoy more power despite the Forest Rights Act. Ladu Ram from Udaipur informed that in Kotra plots have not been allocated despite demands. Size of the plots allocated is too small. Forest officials dare the gram sabhas and application forms for land are deliberately destroyed. Tribals face harassment from the Forest officials. Mangelal from Pratapgarh district informed that the forest department is not bothered by applications from the people. Patwaris seldom provide correct information. Applications for plots are rejected without any reason. Similar, complaints were made by Bapunath Bhai from Chittorgarh and Mohanlal Gadasia from Udaipur. Keshuji said that water is extracted for mining and industry due to which farmers are suffering in Udaipur. In Bara district, land is acquired from the Sahariya tribe by exploitation. Outsiders have started displacing the original inhabitants.

Chandan ji, an activist from RAAM, informed that the Rajasthan government has changed the definition of village under the Rajasthan Panchayati (Modification of Provisions in Their Application to the Scheduled Areas) Act, 1999. It is for the Governor to decide now what a village is. Gram sabhas are not consulted while land acquisition takes place. There is no control over minor forest produce. Tribals cannot go to sanctuaries for accessing minor forest produce. The police hold more power as compared to the gram sabha. Development related decisions undertaken by the gram sabha is not accepted. There exists ignorance / lack of awareness and knowledge about the provisions mentioned in the Central PESA Act in the Fifth Schedule area by people, organisations working with tribal’s in the Fifth Schedule areas and the state officials. The PESA law enacted by the Centre is not implemented in letter and spirit by the Rajasthan government.

BD Sharma told that the PESA Act was enacted way back in 1996 and still we’re discussing about its implementation even though 15 years have passed. Both the Central and the state governments have conspired against the PESA. The state governments often complain that the PESA law has been made by the Centre and not them. Even a Prime Minister like Rajiv Gandhi who stressed for Panchayati Raj system at the grassroots so as to ensure democracy failed to acknowledge the same system in Scheduled areas. The Panchayati Raj Constitutional (72nd Amendment) Act that came in 1992 did not include the tribal areas. That is why the PESA came into being in 1996. Most of the North eastern states under Sixth Schedule Areas (where autonomous councils exist) are not covered by PESA, as these states have their own Autonomous councils for its governance. The Autonomous councils are so powerful that even land cannot be acquired for implementing development related schemes. BD Sharma demanded for state government’s sensitivity to the traditional democratic rights and values of the tribal society, and thus to amend the existing state laws / provisions. He informed that Rajasthan has not transferred the power of ownership of Minor Forest Produce under the State PESA. The PESA law of Madhya Pradesh is so strong that the gram sabha can return a piece of land belonging to a tribal person/ family in case his land has been acquired by a non-tribal person. He said that Andhra Pradesh has a law (1 upon 70) under which tribal land cannot be bought by non-tribals. Moreover, non-tribals have to sell such land, which they have bought to only tribals. The Bhuria Committee that comprised of as many as 15 MPs recommended for communal ownership of land that falls under Scheduled areas. Its recommendation is yet to be implemented. The Prime Minister is talking about the PESA and not the Bhuria Committee. He also mentioned about the Tribal Sub-Plan. India took the decision that areas inhabited by tribal population be considered as Scheduled areas in 1975. Yet little could be done for the development of these areas and the STs.

KB Saxena said that making laws do not ensure the citizens to enjoy the rights. Almost 15 years have passed since the PESA has been enacted. Public accountability of elected representatives is essential. Land acquisition is rampant in areas inhabited by the tribal population. Rajasthan government has not confirmed in this year’s budget how the laws can be amended in accordance to the PESA law.

Ramesh Nandwana informed that the 5th Schedule of the Constitution has provisions for tribal areas. PESA is intended to empower people. According to the law, tribal land cannot be bought by non-tribals. Still land is acquired for building factories, mining and constructing roads. Non-tribals are entering into tribal areas. More and more tribals are involved in distress migration for livelihood opportunities. It is difficult to approach the government for justice since the government too is involved in land acquisition.

BL Paliwal said that Rajasthan came up with Rajasthan Panchayati (Modification of Provisions in Their Application to the Scheduled Areas) Act in 1999. The process or product based system under PESA is not required. Like PESA, the Forest Rights Act needs to be implemented properly. Government of India has created rift among its own people by differentiating between the Marginalized Area Development Authority (MADA) and Tribal Area Development Authorities (TADA) areas.

The other points discussed during the Social Audit are as follows:

Through the displays, one came to know about the special schemes for STs in the Rajasthan Budget, which are as follows:

Powers given to Gram Sabhas in tribal areas under PESA (1996)

Rajasthan Panchayati (Modification of Provisions in Their Application to the Scheduled Areas) Act, 1999, http://www.ielrc.org/content/e9610.pdf

Provisions of the Panchayats (Extension to the Scheduled Areas) Act, 1996, http://www.pri.net.in/dm-documents/PESA/PESA%20Act%201996.pdf

Report of the Committee formed by the Government of India, Ministry of Panchayat Raj, Raghav Chandra Report,

Report of the Sub Committee appointed by The Ministry of Panchayati Raj to draft Model Guide-Lines to vest Gram Sabhas with powers as envisaged in PESA, http://www.pri.net.in/dm-documents/PESA/BD%20Sharma%20Draft%20-%20Model%20Guidelines%20to%20vest%20Gram%20Sabha%20with%20powers%20as%20envisaged%20in%20PESA.pdf

Report of the Committee of Officers on Issues ralating to minor produce in PESA states, February2007,

Body formed to fight for tribal rights in state, The Times of India, 17 March, 2011, http://timesofindia.indiatimes.com/city/jaipur/Body-formed-to-fight-for-tribal-rights-in-state/articleshow/7723104.cms

Roadmap for the Panchayati Raj (2011-16): An All India Perspective, February, 2011, http://www.indiaenvironmentportal.org.in/files/panchayat%20Roadmap.pdf