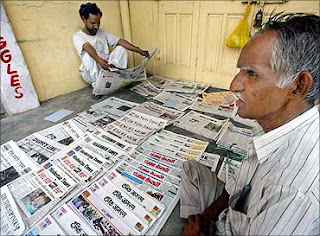 Is the news media gender insensitive? A new study confirms this. The report titled: Global Report on the Status of Women in the News Media, which got unveiled on 23 March, 2011 captures the extent of gender equity in the news media in 522 companies across 59 countries. The main objective behind the study is to enquire whether media companies are currently organized to promote gender equity within their organizational structures and allow space for women's voice. Nearly, 253 newspaper companies (48%), 123 television stations (24%) and 146 radio stations (28%) have been surveyed for this purpose. The seven regions from where 59 countries got covered under the survey are: Mideast and N Africa, Sub-Saharan Africa, Americas, Asia and Oceana, Eastern Europe, Nordic Europe and Western Europe.

The study which was commissioned to International Women’s Media Foundation (IWMF) finds that in most of the 59 countries, it is the men who occupy vast majority of the management jobs and news-gathering positions. Women comprise only 33 percent of the full-time journalism workforce in the 522 companies surveyed. By contrast, women (56.9%) are found to be more likely than men (43.1%) to hold part-time regular jobs, and both full- and part-time contract jobs, than men. However, men are more likely to do freelance jobs. The support for the study came from the Ford Foundation, Loreen Arbus Foundation, Carolan K. Stiles, UNESCO Communication Development Division, Communication and Information Center and McClatchy Company Foundation. The IWMF study provides information about recruitment, training, policies related to advancement, news assignments, and a range of other issues that affect gender status in news organizations.

A 1995 study by Margaret Gallagher shows that Indian women comprised 12 percent of the media workforce. However, the current study by IWMF show that women’s representation has doubled to 25% of the workforce across the 17 companies (10 newspapers, 6 television stations, and 1 radio station) surveyed. Still, it is the men who dominate the media industry in the ratio 4:1. Women earn lesser salaries than men particularly in governance and in top and senior management positions. Women earn similar to men in middle management and in junior professional levels as well as in the technical professional level. Women earn more than men in sales, finance and administration department of news companies.

The Global Report on the Status of Women in the News Media finds that women occupy one-fifth (21%) of the positions in governance in India, which denotes roles on company board of directors. On the basis of interviews of company executives, it could be found that women’s place on governing boards is often determined by their membership in families owning the company, rather than their ability to secure these positions through advancement. Women hold 13.8 percent of positions at top management level in Indian news companies. Women hold 23.3 percent and 18.3 percent of positions in senior management and middle management, respectively. They hold 25.5 percent and 28.4 percent of positions at junior and senior professional levels, respectively. They occupy only 7% of the jobs in the technical production category, and even fewer at 4.7% of those in production and design. Sales, finance and administration sees women holding only 11.4% of the positions. Nearly 20.1%, 45.2%, 9.9%, 23.1% and 6.6% of jobs which are full-time regular, part-time regular, full-time regular, part-time regular and freelance, respectively, are held by women.

India has made strong strides in adopting gender policies in media companies in comparison to countries like China and Bangladesh. However, the IWMF study notes that sexual harassment of women in newsroom is well established across the world including India. A valid criticism against the report is that there is under-representation of Indian news organizations from various regional language backgrounds though they may be the ones earning more profits and capturing majority of the market as compared to the English news media.

The present study, which covers 1,70,000 persons in news media finds a higher representation of women in both governance and top management within both Eastern Europe (33% and 43%, respectively) and Nordic Europe (36% and 37%, respectively), compared to other regions. In the Asia and Oceana region, women hold 13% of those in senior management ranks.

Men hold nearly three-fourths (71.3%) of the positions in middle management of companies (that includes senior editors, chiefs of correspondents, design directors, and more senior personnel in finance) surveyed as compared to women (28.7%). There exists near-parity of men and women at the level of junior professional (that includes writer, producer, sub-editor, correspondent and production assistant) in Americas and Western Europe, as compared to other regions. In Asia and Oceana, the ratio of men to women at the junior professional level was found to be nearly 3:1. There exists a greater degree of gender balance at the senior professional level, with men slightly more than half (59.0%) and women nearing parity (41.0%). Senior professionals include senior writers, anchors and producers. Men hold three-fourths (73.2%) of the jobs in the technical professional level, with women just over a fourth (26.8%). This job category includes camera, sound and lighting personnel – jobs mainly associated with the production of broadcast news. Men fill about two-thirds (65.6%) of the production and design jobs, with women only a third (34.4%). This category includes graphics designers, photographers, illustrators, wardrobe designers and others in the creative roles of news production. In sales, finance and administration, men hold 64.4 percent position as compared to 35.5 percent by women. In Asia and Oceana, women hold one fourth of the positions in sales, finance and administration as compared to men.

Women’s under-representation was noticed in 26 of 59 i.e. 44% of the countries included in the study. Glass ceiling for women is observed in 20 of 59 nations (34%), and such invisible barriers exist in middle and senior management levels. The study finds that more than half of the companies surveyed have an established company-wide policy on gender equity. A relative parity between men and women in terms of occupational status was observed in 13 of 59 nations (22%).

Global Report on the Status of Women in the News Media