Experience of ASER in India: Evolution, Elements and Evidence 2005-2010 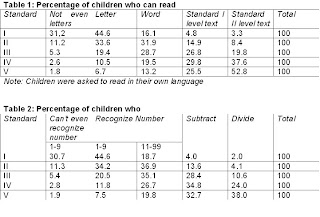 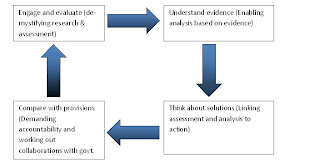 A presentation on the experience and evolution of Annual Status of Education Reports (http://www.asercentre.org/) which is being brought out by Pratham (http://www.pratham.org/) was made by Ms. Rukmini Banerji at Centre for the Study of Developing Societies (www.csds.in) on 22 November, 2010.

In his introduction, Shri Vipul Mudgal, Project Director of Inclusive Media for Change (www.im4change.org) informed the audience that ASER has changed the educational landscape in India. It played a crucial role in participatory democracy. Pratham has been involved since a long time in rating of public service delivery in the field of education. It is one of the first organizations to have worked in the area of rights based approach to development. ASER reports provide a comprehensive analysis and assessment of quality of education among children enrolled in elementary schools across the different Indian states.

In her presentation, Ms. Rukmini Banerji said that Pratham has been working with ‘left out’ and ‘left behind’ children since 1996. Parents and community of out-of-school children are concerned about the kind of education that has been imparted (inputs). When Pratham started with the ASER exercise, it faced lot of criticisms and apprehensions from government officials, experts and the community.

Ms. Banerji informed that learned parents often over-estimate their children’s educational and skill-level. This happened particularly when the survey was conducted in Jaunpur. School teachers too over-estimate their students. School teachers are unable to educate their students as per the standards they are enrolled. It has been found across the states that students (enrolled in a particular standard) are unable to read (in their own language) or do arithmetic pertaining to much lower standards. There exist huge gaps between expected basic level skill and current reading skill level. For example, at the all-India level only 52.8 percent of students enrolled in standard V can actually read standard II level text (see the tables 1 and 2 above). Only 3.3 percent of standard I students in India can read standard II level text.

While commenting on education policy, Ms. Rukmini Banerji informed that there is no international goal on universal learning. There is no definition or reference to children’s learning goals in the MDGs. Sarva Shiksha Abhiyan (SSA) goals are broad “education of satisfactory quality relevant for life…”..and “learning enhancement”.

While talking on learning environment, she informed that 50 percent of rural parents of school children have not been to school themselves or cannot read and write. Most of the rural parents do not know what it needs to support learning.

Ms. Banerji presented the chart above while explaining how data can be collected, analyzed and results can be made available to the public for influencing policy formulation.

Ms. Rukmini Banerji explained the difficulties she faced while preparing village report cards based on data collection and assessment. The expectations of the village community about the educational skill of their students were higher than the actual situation (in terms of educational outcomes). During her presentation, she said that there was a major shift in educational priorities of the Government of India in 2005 in terms of the following points:

Ms. Banerji informed that ASER reports between 2005 and 2009 provide a citizen’s view of schooling and learning. The ASER reports provides one with district level estimates of reading and arithmetic (which the Government does not have). The 2009 ASER report covered 3,20,000 households and 7,00,000 children in the age group 3-16 years. Schools have been observed for basics such as teachers, rooms, textbooks, water etc. The operational aspects of ASER included: sampling design, basic tools (for floor test), simple and fast analysis and ‘digestible’ results.

Participation of students from district level colleges during the ASER surveys has been good from the North East, Himachal Pradesh and Orissa. It is relatively difficult to conduct surveys in West Bengal since one has to get permission from Ward members. The ASER 2009 study shows that Manipur is performing better than Tamil Nadu in terms of children solving arithmetical problems. It has been difficult to test children’s reading skill because in certain states, children communicate (and learn) in various languages apart from their own mother language.

Pratham is planning to put a few more innovative questions in the questionnaire so as to assess the quality of education (like asking children whether they know how to read a calendar). It is also partnering with various organizations for similar exercises in countries from Africa.