NREGA activists protest against the inefficient functioning of MoRD and CEGC 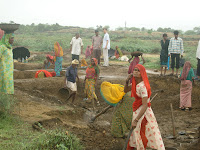 A note circulated by Aruna Roy and Jean Dreze at a meeting of the Central Employment Guarantee Council (CEGC) during August, 2010 led to outburst from some leaders of the ruling UPA 2. The note provided a critique on various aspects of implementation of NREGA. The Ministry of Rural Development rejected an increase in the minimum wages or linking it to prices (Consumer Price Index), as demanded by activists like Aruna Roy and Jean Dreze. It has been felt by the activists that the Government is keen to raise the salaries of the elites instead of the manual labourers who are employed under NREGA.

Ms. Aruna Roy and Nikhil Dey were also unhappy with the way Rajasthan Government refused registration of NREGS workers' unions in the state, despite such unions functioning in other states like UP and Gujarat. Rajasthan has also been the state in news recently, where sarpanches were protesting against conducting of social audits. The sarpanches in Rajasthan have been openly violating rules by giving material supply contracts to their favorites. At many places purchase records were fudged and the wage to material ratio (i.e. 60:40) was distorted by using JCB machines instead of employing manual labourers. The NREGA activists protested against a clause in MGNREGA where sarpanches who spend the money are also authorized to conduct social audit.

It is in this context that a press conference titled ‘Crisis in MGNREGA Implementation’ was held at Indian Women Press Corps, Ashoka Road, New Delhi on 27 September, 2010. During a short interview, Nikhil Dey informed Inclusive Media team that the press conference has been called for informing the media on certain issues:

Prof. Jean Dreze paid homage to Prof. Arjun Sengupta who recently passed away. This was followed by 1 minute silence. In his condolence message, Prof, Dreze informed that Dr. Sengupta would be known for his role in the Right to Development movement and his reports when he was the Chairperson of National Commission for Enterprises in the Unorganized Sector (www.nceus.gov.in). It was his claim that nearly 77 percent of the Indian population live below the poverty line of Rs. 20 per day.

MKSS activist Nikhil Dey informed that the press conference was held to discuss the following issues:

Nikhil Dey told that 99 labourers from Tonk district received Rs. 11/- each for 11 days of hard labour i.e. they were paid at the rate of Re. 1/- per day. Their hard labour was not paid justly. JCB machines were employed at various places. Work done was neither estimated properly by the Junior Engineers so that wages could be paid according to piece rate system nor was minimum wages (flat wages) paid to the labourers employed under MGNREGA. Hence, a Mazdoor Satyagraha would be organized in Jaipur, Rajasthan on 2 October, 2010 where the underpaid 99 labourers’ wage amount would be deposited with the Chief Minister's Relief Fund with the request that the amount be paid as Dearness Allowance to the State government employees, “for whom alone the government cares.” Due to the power and autonomy given to the panchayats, they have started acting like khap panchayats. The panchayats are not accountable to the public anymore. The Government is maintaining anti-labour attitude towards the NREGA. He said that NREGA pushed up agricultural wages in the initial stage but this process is being reversed now due to delayed payment and lower wages. There exists low density of post offices and banks in rural areas. These are poorly equipped. Post offices generally have no computers and are single employee branches. There exists inadequate staff at the Gram Panchayat and Block-levels, which means that crucial record-keeping, including measurement is delayed.

Prof. Jean Dreze said that there has been violation of NREGA under which fundamental entitlements are promised to be provided to the workers. Bharat Nirman Rajiv Gandhi Seva Kendra is a wrong priority under NREGA, which has been emphasized by the Ministry of Rural Development (MoRD). Almost 90 percent of the expenditure would be made on material, if Rajiv Gandhi Seva Kendras are constructed. This would allow backdoor entry of contractors in the NREGS. If there is no provision made for Rajiv Gandhi Seva Kendras by the panchayats, then the second installment would be delayed. This new rule of the MoRD has resulted in delayed payments. The role of the MoRD has been disappointing. The real value of wage is going down because the wage rates were frozen and prices increased enormously. Wages must get linked to Consumer Price Index (CPI), said Dreze. If the wage rate is linked to the CPI, then minimum wages would go upto Rs.125/- per day from Rs. 100/- per day. The minimum wages must be fixed by the states and paid by the Centre. The MoRD’s response to the recommendations of the Working Group on Wages (WGW) has been to delay the matter further by referring it to other committees like Dr. Pronab Sen Committee. The WGW recommended that NREGA wages should be immediately indexed to the price level, using the Consumer Price Index for Agricultural Labourers (CPIAL), with 1 April, 2009 as the ‘base’ so that real value of wage is at least Rs. 100 per day at April, 2009 prices. Prof. Dreze said that violation of Minimum Wage Act, 1948 is not acceptable to the NREGA workers. Article 23 mandates that no person shall be required or permitted to provide labour or service to another on payment of anything less than the minimum wages. The provisions of the MGNREGA must be respected. Compensation for delayed payments must be provided. Why the workers should work if they are not paid in time, he asked. The Government must be proactive in paying minimum wages and compensation for delayed payments. The Central Employment Guarantee Council (CEGC) is functioning like the MoRD because of the way it has been constituted. Delays in payment of wages is a deliberate attempt to harass the workers as the scope of corruption got reduced due to opening up of bank accounts for the NREGA workers. There is no accountability measure to stop unemployment compensation not being paid. Without the provision and payment of unemployment compensation, the scheme cannot be called Employment Guaranty Act.

Dr. Ritika Khera said that in almost every state like Jharkhand, Chattisgarh etc. delay in payment of wages could be observed. Workers cannot work with an empty stomach. If payments are not made properly at the right time then migration would rise. Junior Engineers are engaged in harassing of workers as they are not held accountable. If measurement is not done by the Junior Engineers, then workers must be paid a flat wage (equivalent to minimum wage).

Ms. Aruna Roy informed that social auditing is mandatory under NREGA, which shall be done by the panchayats. At present, corruption is affecting a scheme, which is meant for the poor. Physical verification of work by the public is of utmost importance. In the past 5 years, social auditing in Andhra Pradesh has led to positive outcomes. Presently, sarpanches (gram sabhas) are given the authority for conducting social audits under an order of 2008. But such social audits are neither social nor audits. It is just a symbolic gesture. Bureaucracy and outsiders cannot be a part of such social audits. She said that the conditional cash transfer mechanism cannot reduce corruption and if brought in lieu of NREGA, it would undermine the dignity of labour and the poor. She informed that the Central Employment Guarantee Council (CEGC) does not have enough time to consult and attend meetings. There must be constitution of an Executive Committee. The MoRD must give more autonomy to the CEGC.

Shri Satya Bose from People’s Monitoring Committee, Andhra Pradesh informed that NREGA is a demand driven programme. In the name of rural connectivity, panchayats are diverting funds away from NREGA. Biometric cards are helping people to access wages from banks and post-offices. Shrama Shakti Sanghams-union of NREGA workers is empowering the poor. Andhra Pradesh has the best social audit system as compared to the other states. The Andhra Pradesh government has a separate fund for social auditing. Three rounds of social audit have been done in most villages. More than 10,000 deviations have been brought out by the social audit resulting in dismissal of nearly 4,000 implementing staff and more than 600 criminal cases on the culprits. Since its formation in 2009, Society for Social Audit, Accountability & Transparency (SSAAT) has succeeded in creating a massive social capital by identifying and training more than 60,000 educated youth in the villages in conducting social audit. The Andhra model of social auditing can be replicated elsewhere. In AP, workers receive their payments within a week, which has been possible due to the computerization of the payment process.

Ms. Annie Raja of National Federation of Indian Women said that the primary objective of the NREGA is to provide livelihood security to the needy people. However, in a recent survey of around 1000 workers, it has been found that 62 percent of them did not get their minimum wages. Nearly, 60 percent got their wages after a delay of 3 months. The CEGC’s performance has not been upto the mark. The Government is scuttling the powers of CEGC. The CEGC must be constituted properly. There is no Executive Committee. The CEGC must place a report to the Parliament. The Rajasthan Government has refused registration of NREGS workers' unions. Delay in wage payment can increase the rate of migration.