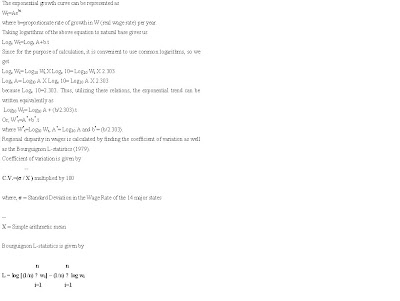 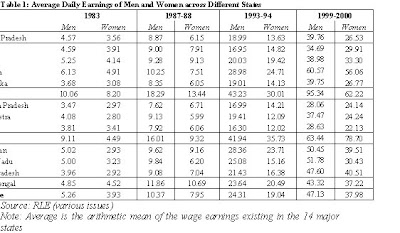 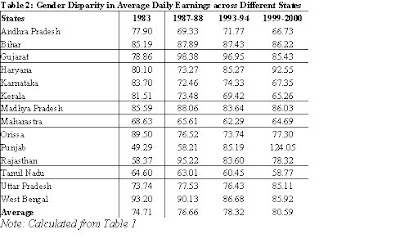 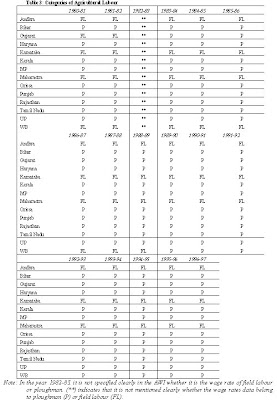 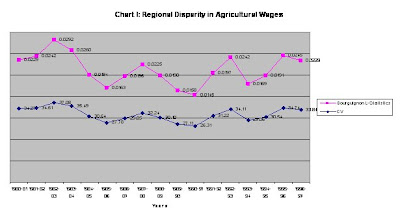 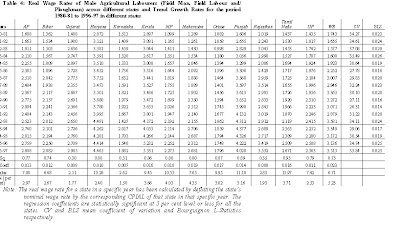 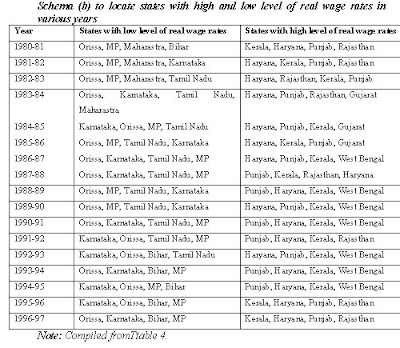 The present study looks at the gender and regional disparity in agricultural wages. Discrimination on the basis of ‘gender’ has been observed in all spheres of human interests including the granting of land rights by the state [Agarwal 2002], intra-household allocation of food and resources [Harris-White 1996; Cowan and Dhanoa 1983; Sen and Dreze 1989] and payment of wages and remunerations [Unni 1999].

The trends in agricultural wage rates during the post-Independence period, and analysis of the factors influencing the trend have generated considerable discussion among economists since the late 1960s. The average daily money wage earnings for all agricultural operations by agricultural labourers in rural labour household increased steadily and sharply between 1956-57 and 1977-78 for both males and females, at the all-India level and for all states [Unni 1988a; 1988b]. This rate of increase was much slower during 1964-65 to 1974-75 than during the entire period. The consumer price index for agricultural labour rose between 1956-57 and 1974-75, with a sharp rise between 1964-65 and 1974-75, and then dropped in 1977-78. Between 1964-65 and 1974-75 the daily real wage earnings of adult males had actually fallen at the all-India level and in all states except Karnataka, Punjab and Uttar Pradesh. In 1977-78, with the fall in consumer price index for agricultural labour (CPIAL), daily real wage earnings for males increased above the 1964-65 level for the country as a whole and all states except Madhya Pradesh, Orissa and West Bengal. The average daily real wage earnings of female agricultural labourers had remained stagnant between 1964-65 and 1974-75 at the all India level and in Karnataka and Punjab. They rose during the same period in Kerala and Uttar Pradesh and fell in the other states i.e. Bihar, Gujarat, MP, Maharastra, Orissa, Rajasthan, Tamil Nadu and West Bengal. In 1977-78, the daily real wage earnings of females rose above the 1964-65 level for the country as a whole and in all states.

Acharya (1989) attempted to construct a disaggregated agricultural wage series in India, for male and female workers separately, covering the period 1970 to 1985, for the 58 agro-climatically homogenous regions in the country, as defined by the National Sample Survey. Using the Agricultural Wages in India data, Acharya found that gender wage gap continued to be 20 to 40 per cent across different regions. The labour market has no specific gender biases in wage movement. In Punjab, the continued fall in female wages till 1977-78, could be due to the large immigration of male agricultural labourers which could have replaced the female labour. Jose (1988) provided a comparative analysis of agricultural wages in various Indian states from the agricultural year 1970-71 to 1984-85. The principal source of data used in the study was Agricultural Wages in India. During the period 1970-71 to 1984-85, it was found that among all the states the two north western states of Punjab and Haryana along with Kerala from the south showed a high average level of money wages. As for the male workers, the highest average for the year 1984-85 was reported from Haryana to be followed by Punjab and Kerala. Among the female agricultural labour, Haryana, Punjab and Kerala showed a relatively high level of wages during the period under review. Tamil Nadu reported the lowest wages throughout the period. The other low female wage states are Orissa, Karnataka and Maharashtra. Jose also attempted to capture gender disparity in agricultural wages. Up to 1984-85, female wages stayed at less than 80 per cent of the male wage rates in some 10 states. There is considerable variation across the states with regard to the incidence of such disparities. In states like Maharashtra, Rajasthan and Tamil Nadu, female wage rarely exceeded 65 to 70 per cent of the male wages while in the states like Assam, Bihar, Himachal Pradesh, Madhya Pradesh and Rajasthan, they remained above 80 per cent levels. In most states, such as Bihar, Haryana, Karnataka, Kerala, Madhya Pradesh, Punjab, Uttar Pradesh and West Bengal, there has been a tendency for the wage disparities to narrow down over time. To get an idea of the extent of regional variation in wages, Jose found out the coefficient of variation of money wage rates in different states for male and female workers during the years 1970-71 to 1984-85. For male agricultural labourers there appeared to have been a further decline in regional wage disparities. The coefficient of variation fell down from 38 per cent in 1970-71 and 1971-72 to 29 per cent during 1983-84 and 1984-85. In the case of female workers, there is no downward trend in the measure of disparities.

Methodology
The study uses two data sources namely the Rural Labour Enquiry Report on Wages and Earnings (RLE), and the Agricultural Wages in India (AWI). To get the gender and regional disparity in wages, the study relies on the RLE and the AWI, respectively.[i] Gender disparity in average daily earnings have been calculated for 14 major states namely Andhra Pradesh, Bihar, Gujarat, Haryana, Karnataka, Kerala, Madhya Pradesh (MP), Maharastra, Orissa, Punjab, Rajasthan, Tamil Nadu, Uttar Pradesh and West Bengal (WB) in four different years i.e. 1983, 1987-88, 1993-94 and 1999-2000. In the current study, the term gender disparity in wages for agricultural labour means the female wage earnings as a percentage of male wage earnings.

Gender Disparity in Agricultural Wages
Table 1 shows the average daily earnings of men and women across different states in the years 1983, 1987-88, 1993-94 and 1999-2000.
From the Table 2, one gets the gender disparity in the wage earnings in the 14 major states of India. A schema (a) has been prepared to locate the states with high and low gender disparity in wages. States which traditionally have shown high gender disparity in wages are Tamil Nadu and Maharashtra, whereas states having low gender disparity in wages are West Bengal and Gujarat. It is interesting to see Punjab replacing Kerala in terms of state with low gender disparity in wages in 1999-2000. However, it can be pointed out that it was only in 1999-2000 for Punjab and not in the past three rounds for any other state that female wage earnings exceeded male wage earnings. This can be due to the error in the data itself.
Regional Disparity in Agricultural Wages
It should be mentioned here that the data on wage rates for male agricultural labour for different states is not based on a homogenous category of agricultural labour. For some years, wage rates of ploughman and for the remaining years, wage rates of field labour or field man has been used, due to unavailability of wage rates for a consistent category of labour. One can consult the Table 3 to know which category of agricultural labour’s wage rate (i.e. whether it is field man, field labour or ploughman) has been used in different years for different states.
Table 4 provides the daily real wage rate of male agricultural labour. The real wage rate for a state in a specific year has been calculated by deflating the state’s nominal wage rate by the corresponding Consumer Price Index for Agricultural Labour (CPIAL) of that state in that specific year. The trend growth rates across different states and regional disparities in wage rates (in terms of coefficient of variation and Bourguignon L-statistics) have been calculated and produced in the Table 4.

The state having the highest trend growth rate of real wage rates of male agricultural labourers is West Bengal (5.23 per cent). Other states which showed higher trend growth rates in agricultural wages are: Maharashtra (4.35 per cent), Madhya Pradesh (4.03 per cent), Orissa (3.82 per cent) and Tamil Nadu (3.71 per cent). The state having the lowest trend growth rate of real wage rates of male agricultural labourers is Karnataka (1.50 per cent). States which showed lower trend growth rates are: Gujarat (1.77 per cent), Rajasthan (1.93 per cent), Haryana (2.40 per cent), Uttar Pradesh (2.53 per cent) and Bihar (2.67 per cent).
A schema (b) has been prepared to locate the states with high and low levels of real wages. States which consistently showed higher level of agricultural wages are: Kerala, Punjab and Haryana. States which consistently showed lower level of agricultural wages are: Orissa, Karnataka and Madhya Pradesh.
Regional disparity in agricultural wages (measured through both the coefficient of variation and Bourguignon L-statistics) showed variations but had been on the rise since 1993-94 onwards (see Chart-I).
Conclusion
This simple study on agricultural wages shows that states like West Bengal and Gujarat have performed well in providing gender equal wages to men and women. Kerala’s performance in maintaining gender equal wages has been poor in recent years. West Bengal has performed quite well in between 1980-81 to 1996-97 in terms of growth rate in real wage rates. Kerala, Haryana and Punjab have shown consistently high level of real wage rates, but not growth rate in real wage rates. The need for raising the minimum wages in states like Orissa, Karnataka and Madhya Pradesh is of paramount importance.
NOTES
[i] The definitions are taken from 43rd Round of National Sample Survey (NSS) on Employment and Unemployment.
[ii] The ALE/ RLE do not report wage rates for agricultural operations. They provide information on average daily wage earnings of agricultural labourers. Information on earnings was recorded for a week for each of the activities in which usually occupies members of the household were engaged in as wage paid labourers. The average daily earnings were arrived at by dividing the aggregate earnings for each activitiy by the corresponding number of days employment with full intensity in that activity. Payment in kind are valued at wholesale prices in the 2nd ALE and later RLEs. These data therefore do not relate to the prevailing wage rates in a region, but show only an average based on days of employment and the total wage income (Unni, 1988 a). The AWI provides data on the daily agricultural wage rate, on a month by month basis, from selected centres in the districts of different states for male, female and child agricultural labour. This annual publication has been in existence since the year 1951-52 and is the only published source availale to researchers for continuous data. AWI is a source of continuous data. It is the annual publication of the Directorate of Economics and Statistics, Ministry of Agriculture, Government of India. It provides wage data for the following categories of agricultural labour: (a) field labour; (b) other agricultural labour, and (c) herdsman. Field labour includes ploughers, sowers, transplanters, weeders, harvesters etc. Other agricultural activities for the labour includes load carrying, watering of fields, repairing waterways and embankments etc. The primary task of the herdsman is to collect livestock rom different owners’ houses, to take them for grazing during the day, and to bring them back to owners’ houses by the evening (Jha, 1997).
[iii] Note: The method to calculate the trend growth rate has been adopted from Nagar and Das (1994): ‘Chapter 13: Time Series Analysis’ in Basic Statistics, 2nd Edition, Oxford University Press, pp. 331-334.

Agarwal, Bina (2002): ‘Are We Not Peasants Too? Land Rights and Women’s Claims in India’, SEEDS Publication, Twenty First Issue.

Cowan and Dhanoa (1983): ‘The Prevention of Toddler Malnutrition by Home Based Nutrition Health Education’, in Nutrition in the Community: A Critical Look at Nutrition Policy, Planning and Programs (ed. by DS Mclaren), 339-356.

Unni, Jeemol (1988 b): ‘Changes in the Employment, Wages and Incomes of Agricultural Labourers in Rural Labour Households 1956-57 to 1977-78’, Working Paper No. 21, The Gujarat Institute of Area Planning, Working Paper Series.

So can u please tell your data source so that I can use this dataset.