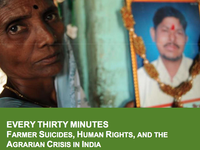 Flouting of dalit and gender rights contribute to committing of farmer suicides despite Government’s effort, according to a report by the Centre for Human Rights and Global Justice (CHRGJ).

The report issued by CHRGJ and the International Human Rights Clinic (at New York University School of Law) claims that farmers’ suicide, which is connected to agrarian crisis will become more severe due to the existing gender and caste-based discrimination in the Indian society since the government has so far taken only financial steps as policy measures instead of going for structural changes.

In the document titled Every Thirty Minutes-Farmer Suicides, Human Rights, and the Agrarian Crisis in India, 2011 (for the full report please check the link no.1 and for the press release check the link no. 2) it is said that there is a deep association between farmer suicides and caste or gender-based discrimination. After the implementation of neo-liberal policies in India (pertaining to commercial/ corporate agriculture) the pattern of farming has witnessed a sea change. Due to socio-economic obstacles, farmers belonging to the so-called “lower caste” lack the essential technology to undertake corporate farming and it is possible that debt burden on these farmers for carrying out cotton farming based on Bt cotton or farming cash crops which is capital-intensive in nature may be more compared to the rest.

According to the same report “lower caste” farmers and their families face discriminatory policies when it comes to land entitlement. Farmers who do not have title to land are not enumerated as the same in official surveys and therefore when the family head dies by committing suicide, the family is often deprived of the compensation and relief package which is being offered by the Government. Similarly, tenant farmers are not counted as farmers. In technical terms, a large section of farmers who do not have title to land are women, dalits and tribals and the Government of India’s National Crime Records Bureau statistics actually underestimates the number of farmer suicides. Marginalized sections like women and dalits do not enjoy access to formal credit as they do not have title to land (property rights). Being a signatory of International human rights treaties, the Government of India has been appealed by the present report to end, investigate and undertake proper steps regarding caste/ gender factors related to farmer suicides.

In order to make the point that families of farmers who committed suicides owing to debt burden in the midst of agrarian crisis, face social injustice and discrimination to access relief schemes of the government, the report has provided several examples. The report mentions the story of Kalawati. The patriarchal society in India often deprives the women of their rightful access to land title and in the midst of agrarian crisis the impact may be fatal. The Government of Maharastra provides a compensation of Rs. 1 lakh to the family of a farmer who has committed suicide on the basis of three conditions. The first condition is that the farmer must have titled land; the second is he must be indebted at time of committing suicide; and the third is indebtedness must be the primary reason behind his suicide. Despite fulfillment of the above 3 conditions, families of farmers who committed suicide are still deprived of the compensation by the Government.

The story of Kalawati Bandurkar is similar to this. In 2007, her husband committed suicide. Kalawati is a mother of nine children and grandmother of five children. Apart from working as a labourer on others’ field, she farms on a separate cropping field of 9 acres size. After the death of her husband, Kalawati did not receive any compensation because the piece of land (9 acres) on which her family cultivates is not owned but has been taken on lease.

The truth revealed by this report is unquestionable. According to a news report by The Hindustan Times [see link no. 3], death toll due to suicide could have reached 28 in Vidarbha by the month of May, 2011 due to agrarian crisis and economic distress. So far, the number of farmers who have committed suicide from Vidarbha is 203 this year. Government’s claim that its two relief schemes worth Rs. 5050 crore have been able to reduce the incidents of suicide is false.

According to statistics provided by the National Crime Records Bureau during the year 2009, 348 persons committed suicide everyday out which 48 were farmers. Since 2004 on an average 47 farmers commit suicide every day which means every 30 minutes a farmer commits suicide (please check the links below).

Key findings of the report- Every Thirty Minutes-Farmer Suicides, Human Rights, and the Agrarian Crisis in India: