“Right to Food: A Dialogue with Amartya Sen” 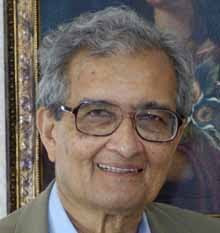 A face-to-face interaction of Prof. Amartya Sen with reporters and journalists from media on the issues related to the newly drafted National Food Security Bill took place at the Press Club of India, New Delhi on 8 August, 2009 (11.00 a.m.-12.30 p.m.). Prof. Yogendra Yadav from the Centre for the Study of Developing Societies (CSDS, http://www.csds.in/) chaired the session. He explained to the media persons present about the importance of Right to Food. He informed that various individuals and organizations are today waiting for a strong and vibrant Right to Food Act. While introducing Prof. Amartya Sen, he said that the Nobel laureate has played a crucial role in the Economics discipline by reintroducing Philosophy and Ethics. While introducing the rest of the speakers i.e. Ms. Kavita Srivastava, Mr. Harsh Mander and Prof. Jean Dreze, he said that a time would come after 15-20 years, when people would look back at history to find those who talked about human development and social justice instead of just higher growth rate of gross domestic product (GDP).

The first speaker Ms. Kavita Srivastava, an activist from People’s Union for Civil Liberties (PUCL, http://www.pucl.org/) spoke at length about the Right to Food Campaign (http://www.righttofoodindia.org/), which is a network of 12 large national and regional networks and groups. It came into being when the PUCL filed a writ petition with the Supreme Court of India in the year 2001 regarding starvation deaths that took place in Rajasthan despite growing stocks of foodgrain in Food Corporation of India’s (FCI) godowns. The Right to Food campaign has been successful in bringing out the Antodaya scheme and the setting up of the Supreme Court Commissioner on Right to Food (http://www.sccommissioners.org/). Now, the Anganwadis have been made universal in terms of reach out. Earlier, the Supreme Court has also issued orders to the various state governments in order to make the Mid Day Meal Scheme (MDMS) workable and mandatory. She said it was nice to find that 2009 Parliamentary elections have been fought in the country on the issue of enacting the Right to Food Act. The commitment to enact the Food Security Bill was reiterated by the President of India on 4 June, 2009. The draft National Food Security Bill is yet to be displayed at the website of the Ministry of Consumer Affairs, Food and Public Distribution (http://fcamin.nic.in/). However, a concept note has already been prepared by the Department of Food and Public Distribution. A Group of Ministers (GoM) comprising of leaders like Pranab Mukherjee, Ms. Mamta Banerji, C.P. Joshi, A.K. Anthony, Sharad Pawar etc. are looking at the draft for further modifications. Speaking on the newly proposed Bill, she said that food security requires food availability, social access etc. Food production needs to be sustainable in nature. There should be direct food entitlements and protection of the enabling environment. The Right to Food Bill should have safeguards to prevent encroachments by private contractors and corporate lobbies. The Mid Day Meal Scheme (MDMS) should provide hot cooked meal instead of ready-to-eat food since the provision of the latter would encourage the entry of private contractors to provide the same in schools. There should be an independent authority for ensuring accountability and grievance redressal, Ms. Srivastava demanded. Women must be regarded as the heads of the households under the National Food Security Bill. Coarse grains must be made available through the PDS at subsidized rates. She informed that a “freelance draft” of the Right to Food Act, dated 24, June 2009 and circulated for discussion is available at http://www.righttofoodindia.org/.

Mr. Harsh Mander, who hailed from Supreme Court Commissioner on Right to Food said that India has been able to prevent famines but widespread hunger still persists. As a part of the Supreme Court Commissioner on Right to Food, he looks at various issues related to hunger and malnutrition. Although India has sufficient food to feed every mouth, there is widespread hunger and malnutrition. Despite being a democracy, India has been unable to ensure Right to Food to All till now. There are barriers created by caste, gender, age, etc. within the community and the household. There is the utter need for public provision of food. Every person needs to be reached out to. The National Food Security Act must include out-of-school children, single women, the elderly and the infirm in need of daily care, migrant workers and their families, bonded labour families, the homeless and the urban poor. People should have access to food along with dignity. He mentioned about the success of Brazil’s Zero Hunger Project. Eliminating hunger is Brazilian President Lula da Silva's top priority.

Prof. Jean Dreze mentioned that Right to Food must be discussed in the context of nutrition. There is a need to look at the National Family Health Survey-III, which was conducted in the year 2005-06. If one looks at child malnutrition, then one would find that percentage of children (under 3 years) who are underweight declined marginally from 47.0 during NFHS-II to 45.9 during NFHS-III at the national level. The Supreme Court orders on Mid Day Meal Scheme (MDMS) and Right to Food have taken place in the recent years. The MDMS has been successful in many of the states. The National Rural Employment Guaranty Scheme (NREGS) is able to ensure food security, he said. The NREG Act is complementary to the Right to Food. Right to Food can ensure entitlements. The 2009 Parliamentary elections have made some serious promises. But one may doubt that the Government is re-packaging some existing schemes. Simple interventions won’t provide the desired results. Systematic intervention is required. A working group comprising of Prof. Dreze, Mr. Mander and a few others is preparing an alternative National Food Security Bill. He emphasized on the 3 pillars of food security: a. Programmes for Social Assistance; b. A set of child nutrition programmes (including MDMS and Integrated Child Development Scheme-ICDS) that supports breast feeding too; and c. An universal Public Distribution System (PDS) that covers everybody.

While addressing the media persons, Prof. Amartya Sen expressed his concerns over the widespread prevalence of hunger and undernourishment in the world in general and in India in particular. There are problems of inclusion and exclusion errors while targeting the below poverty line (BPL) population. Some of the African countries are performing better than India in reducing the levels of malnutrition. India has escaped the global economic crisis and it is good to find that the Government has not dismantled all the schemes and programmes. He said that there was a time when the country was terminated by communal riots and violence, which is mentioned in his newly released book titled: The Idea of Justice. Public scrutiny and action is must for the proper functioning of the Right to Food Act, he said. There is need for good provisions within the Act. One of the problems of undernourishment is that it is invisible. Poverty and food insecurity exists due to lack of access to gainful employment, education and health care. Without food, children cannot perform well in their classrooms. There are complementarities between hunger and education. Accountability of primary school teachers is essential. There is a need for a range of interventions, to address different aspects of the problem, he argued. Programmes such as NREGA, ICDS and the Public Distribution System (PDS) have much to contribute, but no single programme is the panacea – “we need them all,” he said. Professor Sen highlighted the complementarity between different interventions, and the correlation between malnutrition, poor health, illiteracy, and other deprivations. He explained life cycle approach to inter-generational malnutrition, where nutritional status of mothers determines the nutritional and health status of the children (even when they grow up). He informed about the work of his then student and now Prof. S.R. Osmani, who has worked on economics of health. He mentioned about the World Health Organization’s (WHO) Commission on Social Determinants of Health. He asked not to go for premature privatization of the health system. The extent of gender inequality is quite large, he said. Among other neglected aspects of the nutrition situation, Professor Sen highlighted the lack of health care. He strongly criticized India’s “ghastly premature privatization” of health care. Asked about his views on “targeting versus universalization” of the PDS, Professor Sen said that there were strong arguments for universalization. For instance, a universal system is less divisive, and helps to create a strong public demand for quality services. A targeted system, on the other hand, always involves exclusion errors. These arguments for universalization are “not dismissible”, he said, but may need to be weighed against the possible costs. The universal PDS allows for better public provision because even the better-off groups with more political voice have a stake in ensuring it works well.

During the question and answer (Q&A) session, when Prof. Sen was asked about the usefulness of cash vouchers, he said that there are limitations pertaining to the voucher system since it can neither stop corruption nor prevent gender inequality. He found merit in the universal Public Distribution System (PDS). When questioned on privatization, he said that privatization of the Indian Airlines/ Air India is a different thing than allowing private contractors to supply ready-to-eat food at schools. Things must be judged within a particular context. The success of the Integrated Child Development Scheme (ICDS) is extremely important.

Prof. Dreze later took the questions posed by the reporters after the departure of Prof. Sen. When asked what would be the single most important change that can make the PDS work better, Prof. Dreze said that a range of interventions are required to bring about the necessary changes. The present PDS is costlier because of the way foodgrain is procured and sold at the national level. Instead a system that cater to local people’s production and consumption desire must be welcomed. When questioned about the provision of food safety within the proposed Right to Food Bill, he said that food safety has been mentioned in the preamble of the Bill. However, every clause pertaining to the Food Safety and Standards Act, 2006 could not be included in the Right to Food Bill. The Bill has provisions to disallow invasion by the corporate lobbies and the private contractors. Mr. Harsh Mander said that women must be seen as individuals having rights and their nutritional status needs to be enhanced. Since land acquisitions in the past have been troublesome and deprived people, there should be laws enacted that protect people’s access to land, water and natural resources to ensure livelihood security, said Ms. Kavita Srivastava during the Q&A session.

(Partially, based on the minutes of the event written by Shambhu Ghatak and Reetika Khera)