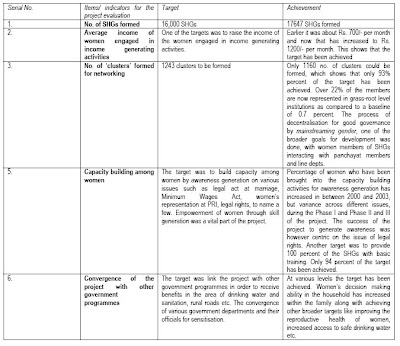 The Swa-Shakti project, which started in the year 1988, aimed at development and empowerment of women (economical), particularly those engaged in “on farm” activities in rural areas, through the formation of dynamic Self Help Groups (SHGs). However, it is a different case that economists and various other Reports have been asking and demanding for off-farm rural employment generation, in order to reduce the pressure on land, particularly in an over-populated developing country like India, which has witnessed disguised unemployment. The Swa-Shakti project is an externally aided one and is implemented in the states of Gujarat, Haryana, Jharkhand, Karnataka, Madhya Pradesh, Uttar Pradesh, Uttarranchal, Bihar and Chattisgarh. The project funders are the World Bank and International Fund for Agricultural Development (IFAD). The scale of the project can be deciphered from the table projected above, as per the budget documents of 2004 presented by the Ministry of Human Resource Development (Government of India) for the Department of Women and Child Development.

Md. Yunus’s (the Nobel laureate from Bangladesh) idea of poverty alleviation through SHG (self-help groups) formation for micro-credit has been welcomed by the various lending agencies including the World Bank, and has been experimented in various parts of the world. But there are criticisms too regarding the Grameen Bank, in the literature.

Out of the Total Plan Expenditure of the Budget of 2004-05, which is Rs. 2600/- crore, the Swa-Shakti project held a share of 1.54 percent. This amount is quite large if one considers the no. of major heads which is 26. It is important to know that although there had been lot of hue and cry for reducing fiscal deficit as percentage of GDP (as a part of Washington Consensus strategy), the recent trend and view among economists is to increase/ raise expenditure for social sectors like health, education etc. since investments in these sectors are likely to generate welfare, employment (positive externalities), economic growth, poverty reduction etc., provided the funds are utilized in an accountable and transparent way.

The evaluation of a programme, which is aimed at gender equality and empowerment is essential in the context of the gender mainstreaming of policies and programmes implemented by the different governments as it was one of the objectives stated during the Beijing Women’s Conference held during 1995. Looking at the objectives of the Swa-Shakti project thus becomes pertinent. The objectives of the Swa-Shakti project are: Enhancing women’s access to resources (credit/ loan in a globalized world like ours) for better quality of life through the use of drudgery and time reduction devices, health, literacy and imparting skills for confidence enhancement and increasing women’s control over income through involvement in skill development and income-generating activities. But can these things really happen in a patriarchal society like India, where one has often heard of honour killings taking place? In order to evaluate a project one needs to know the targets achieved and missed out (outcome and performance budget is quite useful in this direction). The targets are usually stated in terms of broad indicators. The targets achieved (or missed) by the current project can be briefly stated in the chart above. However, there can be some talk on the limitations of the project in terms of reduction of gender inequalities in income and wages, and women’s control over resources and their bargaining both within and outside the family. There exists lack of information regarding women’s role-play and overall outcomes. Attempts should be made on research activities including PRA techniques (and also based upon other research attempts/ techniques), in order to evaluate such project/s.
Posted by shambhu at 2:01 PM