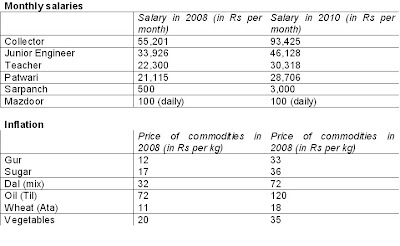 The Suchna Evum Rozgar ka Adhikar Abhiyan (SR Abhiyan) began a Mazdoor Haq Satyagraha (indefinite dharna) from the 2nd of October, 2010 near the Statue Circle in Jaipur, Rajasthan, which witnessed participation of nearly 1500 NREGA workers and farmers on the very first day.

The SR Abhiyan organized a Mazdoor Haq Yatra, in which there were 5 groups - one each in Ajmer, Jodhpur, Kota, Rajsamand and Udaipur. The yatras started on the 15th of September, 2010 so as to mobilize mazdoors and farmers on the issues of non-payment of minimum wages under NREGA, increase in minimum wages, work done by workers not being measured properly by junior engineers and widespread corruption and leakages in the existing employment guaranty scheme. The 5 groups converged near the Statue Circle in Jaipur on October 2nd, 2010-the day Gandhi Jayanti was celebrated.

A delegation comprising of 99 NREGA labourers from Tonk district who were paid Rs 1 per day as wage rate went to meet the Panchayati Raj and Rural Development Minister of Rajasthan Government Shri Bharat Singh, and handed over to him a cheque of Rs. 1037/- to be deposited under Chief Minister’s Relief Fund.

The NREGA workers at the dharna site were demanding for their just labour rights through the following slogans:

(Make an increase in Minimum Wages to Rs. 200 per day)

(We are demanding for our Rights, We are not begging)

Shri Bhanwar Singh Chadana from Aastha, Udaipur during a short interview to the Inclusive Media for Change (www.im4change.org) team informed that the following issues would be raised during the indefinite dharna:

The Government of Rajasthan is not ready to increase the minimum wages so as to avoid fiscal burden. Even if wages are increased, it wants the Central Government to pay the extra amount

The salaries of the Government employees have been increased according to the recommendations of the 6th Pay Commission. Moreover, the salaries of the Members of Legislative Assembly (MLAs) and Members of Parliament (MPs) have been hiked. However, there has been no improvement in the wages offered to the NREGA workers

Through simple tables and figures, the Mazdoor Haq Yatra displayed to the gathering that how the wages and salaries of the collectors, junior engineers, teachers, patwaris and sarpanches witnessed a huge rise between 2008 and 2010. Except the NREGA workers, every other Government official’s salary has risen between 2008 and 2010. Please see the table provided above.

Again, through simple tables and figures, the Mazdoor Haq Yatra displayed that how the prices of essential commodities have increased between 2008 and 2010. Though the Government provides dearness allowance (DA) to its employees by revising the basic salaries twice in a year so as to protect them from rising prices, there has been no effort on the part of the Government to link the minimum wages of the NREGA workers to the Consumer Price Index (CPI). Please see the table provided above.

Ms. Aruna Roy from Mazdoor Kisan Shakti Sangathan (MKSS) spoke about the life and struggles of Mahatma Gandhi. She explained the meaning of the following popular Bhajan:

She informed that Mahatma Gandhi was not killed by a Muslim but by a Hindu fanatic Brahmin named Nathuram Vinayak Godse. She asked that everyone should follow Gandhi ji’s Talisman, which says:

"I will give you a talisman. Whenever you are in doubt, or when the self becomes too much with you, apply the following test. Recall the face of the poorest and the weakest man [woman] whom you may have seen, and ask yourself, if the step you contemplate is going to be of any use to him [her]. Will he [she] gain anything by it? Will it restore him [her] to a control over his [her] own life and destiny? In other words, will it lead to swaraj [freedom] for the hungry and spiritually starving millions? Then you will find your doubts and yourself melt away."

She also praised Babasaheb Bhimrao Ambedkar who wrote the secular Constitution of India. She said that credit facilities for buying cars have become easier, while it has become costlier to get loans for farming. She criticized the present structure of the National Food Security Bill and said that the public distribution system (PDS) should be made universal.

MKSS activist Nikhil Dey asked that a People’s Commission on Wages should be constituted to discuss the issue of payment of minimum wages and increasing minimum wages to Rs. 200 per day. He said that dearness allowance is given to the Government employees and not to the workers under NREGA. If there is monitoring of work done by NREGA workers, then why the same should not be applied for the government officials. He informed that efficiency of the Government can be judged from the fact that Rs. 19,000 crore has been the annual revenue collection by the Government of Rajasthan from various sources, whereas Rs. 22,000 crore is spent annually for payment of salaries and pensions of Government employees. Government employees constitute only 1 percent of the population and a huge expenditure is made on their salaries and pensions. He explained that a worker who earns less than his/ her minimum wage is nothing but a slave.

Shri Bhanwar Singh Chadana from Aastha said that the indefinite dharna has been called to demand for the fulfillment of workers’ rights under NREGA. The sarpanches must allow conducting of social audits by outsiders.

Ms. Richa spoke at length about the role of gram panchayat in conducting social audits. She said that ward panchayat must also be included along with the gram panchayat. Farmers’ issues must be raised so that they get the right prices for their produce. Despite India having enough foodgrains in its buffer stock, people are dying due to starvation and hunger.

Ms. Renuka Pamecha said that higher officials are not accountable to the public They do not provide services to the public efficiently. MPs and MLAs have increased their salaries. But NREGA workers’ salaries have remained stagnant. There is a need to fight against the new ‘kings’ and ‘queens’ i.e. the babudom. There are many crorepatis among Indian MPs but they still ask for higher salaries.

Ms. Arundhuti Roy informed that a massive war is taking place against the poor in states like Chattisgarh, Madhya Pradesh, Jharkhand and West Bengal. In states like Chattisgarh, the police is engaged in extortion and rape. The Government has waged a war against its own people so as to give mining rights and right to exploit natural resources available in forests to the corporate sector and the multinational corporations (MNCs). Nearly 25 percent of the national asset is owned by the richest 100 persons of India. India is much poorer than Africa in absolute terms. Nearly, 77 percent of the population lives below the poverty line of Rs. 20 per day. During the 1970s, Naxalism came into being to protest against the growing income disparity between the rich and the poor. In the name of tackling Maoism and Naxalism, the Government is presently engaged in human rights abuse. Tribal people are victimized by the police and the army. The Government wants to end small-scale agriculture done by poor cultivators and marginal farmers. The Government is working in favour of corporate and commercial agriculture. In Rajasthan, a movement is taking place to give NREGA workers the minimum wage. She questioned whether India can be called a super power since its labourers are paid Rs 1/ day. Whatever is happening in J&K, would replicate in other states of the country if the current scenario of exploiting the poor continues. She said that in Chattisgarh, one can be jailed for 7 years without any reason.

Minimum Wages Act for MGNREGA too: NAC by Anindo Dey, The Times of India, 25 October, 2010, http://timesofindia.indiatimes.com/city/jaipur/Minimum-Wages-Act-for-NGNREGA-too-NAC/articleshow/6806040.cms

The Wages of Discontent by Aruna Roy and Nikhil Dey, The Hindu, 22 October, 2010, http://www.thehindu.com/opinion/lead/article843173.ece?homepage=true

No guarantees anymore by Sowmya Sivakumar, The Hindu, 3 October, 2010,

Labourers go on indefinite strike, press for demands, The Times of India, 3 October, 2010,