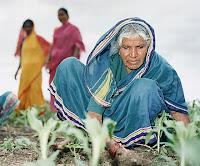 There could not have been a better timing for the release of the Advance Estimates of National Income 2010-11 of the Central Statistics Office (CSO), Ministry of Statistics & Programme Implementation (MoSPI) since everybody is eagerly waiting for UPA 2’s third budget. The newly released document show that GDP arising out of the agricultural sector registered a growth rate of 5.4 percent at factor cost at constant (2004-05) prices in 2010-11. The CSO document predicts that the ‘agriculture, forestry and fishing’ sector would grow by 5.4 per cent in its GDP during 2010-11, as against the previous year’s growth rate of 0.4 per cent. In another estimate made by the Survey of Professional Forecasters: Results of the Fourteenth Round (Q3:2010-11), for the year 2010-11, the forecast for agriculture has been revised upwards from 4.6 per cent to 5.0 per cent (See the links below).

Despite positive claims being made about agricultural production by the Congress-led UPA 2, there are key areas of concern where Indian agriculture is still lagging behind.

The key challenges faced by Indian agriculture are as follows:

Rain-fed farming: It is beyond doubt that the fate of Indian agriculture is determined by the monsoons. The percentage coverage of irrigated area under rice, wheat, coarse cereals, pulses, foodgrains, total oilseeds and all crops during 2007-08 have been 56.9 percent, 90.9 percent, 14.2 percent, 16.2 percent, 46.8 percent, 27.1 percent and 44.6 percent, respectively. Hence, it can be inferred that production of coarse cereals, pulses and oilseeds is highly rain-dependent and take place in arid and semi-arid areas of our country. Only, 44.6 of the area under principal crops is irrigated.

Stories of farmers committing suicides are frequently reported in media from states like: Andhra Pradesh. Madhya Pradesh, Karnataka and Maharastra (see the links below). According to the recently released National Crime Records Bureau's Accidental Death and Suicide (2009), the number of suicides committed by farmers in 2009 was 17,368, which was a rise by 1,172 as compared to 2008. Self-employed category accounted for 39.8% of suicide victims in 2009. It comprised 13.7% engaged in Farming/Agriculture activities, 6.1% engaged in Business and 2.9% Professionals. Despite a fall in number of suicides committed by farmers in 2009 as compared to 2008 in Maharastra (fallen by 930), the state continues to be number one in terms of farmers' suicides for the tenth year (2,872 suicides) as compared to the rest of the Indian states.

Revamping the Agriculture Produce Marketing Committee Act: The State APMC Acts establish and regulate a large number of agricultural markets in India. The entire geographical area in a state is divided and declared as a market area wherein the markets are managed by the Market Committees constituted by the state Governments. No person or agency is allowed freely to carry on wholesale marketing activities, once a particular area is declared a market area and falls under the jurisdiction of a Market Committee. It is believed by a set of economists that the monopoly of Government regulated wholesale markets has hampered the development of a competitive marketing system in India, providing no help to farmers in direct marketing, organizing retailing, a smooth raw material supply to agro-processing industries and adoption of innovative marketing system and technologies. The Task Force on Agricultural Marketing Reforms set up by the Ministry of Agriculture has suggested promotion of new and competitive Agricultural Market in private and cooperative sectors to encourage direct marketing and contract farming programmes, facilitate industries and large trading companies to undertake procurement of agricultural commodities directly from the farmer’s fields and to establish effective linkages between the farm production and retail chains.

Presently, agricultural produce can be moved out of an area only by agents who own licenses issued under the APMC Act. However, the Central Government has envisaged a model APMC Act for the states to enable the smooth flow of produce from one place to another. Key proponents of the revamped APMC Act want to squeeze the interference by the intermediaries so that the fruits of rising prices can be enjoyed by the farmers. Foreign direct investment (FDI) in multi-brand retail is also seen as a solution to combat inflation. According to the critics of the existing APMC Act, the cleaning, grading and packaging of agricultural produce before sale by the farmers have not been popularized by the market committees on a sufficient scale. There is demand for bringing more uniformity in powers and functions of Boards and demarcations of activities between the Directorate of Marketing and State Agricultural Marketing Boards. The number of regulated markets is relatively more in geographically larger states viz. Andhra Pradesh, Bihar, Maharashtra, Madhya Pradesh, Uttar Pradesh and West Bengal.

However, the Left parties are up in arms against the model APMC Act as they feel that it would lead to cartel formation by the traders and hoarding of essential commodities would accelerate, thus, adversely affecting the consumers. In the recent days, when India saw huge rise in prices of onion and other essential commodities, both the pro-and-anti APMC lobbies were seen on TV channels either advocating or critiquing the revamping of the same Act. The Left parties feel that FDI in retailing would greatly hamper food sovereignty.

Lack of storage facilities: Growth in food grain and agricultural production should be backed by sufficient and proper storage and distribution system. Recently, India has seen wastage of foodgrains in states like Punjab in the backdrop of high prevalence of malnutrition.

According to the 11th Five Year Plan (2007-2012) documents, lower growth in productivity increase and profitability in agriculture is attributable to:

• Inadequate investment in rural infrastructure has hampered the growth of agriculture

• Smaller size of land-holdings and fragmentation, which is affecting productivity

• Adoption of modern agricultural practices and use of technology is inadequate. There has been inefficient use of available technology and inputs.

• Agriculture is mainly rain-fed. There has been low level of public investment in irrigation-related infrastructure

• Increased vulnerability to world commodity price volatility following trade liberalization. This had an adverse effect on agricultural economies of regions growing crops such as cotton and oilseeds

• Uneven and slow development of technology

• Degradation of natural resource base

• Rapid and widespread decline in groundwater table, with particularly adverse impact on small and marginal farmers

Probably, a lot needs to be done before one gets satisfied with the prospect of a good turnaround of the agricultural sector in 2010-11.

Survey of Professional Forecasters : Results of the Fourteenth Round (Q3:2010-11), http://rbi.org.in/scripts/PublicationsView.aspx?id=13050

Agricultural Statistics at a Glance 2010, http://dacnet.nic.in/eands/latest_2006.htm

1326 Indians die due to accidents, suicide every day, The Times of India, 17 January, 2011, http://timesofindia.indiatimes.com/india/1326-Indians-die-due-to-accidents-suicide-every-day/articleshow/7300325.cms

Gowda's homeland is land of farmers' suicide too, The Times of India, 12 January, 2011, http://timesofindia.indiatimes.com/city/bangalore/Gowdas-homeland-is-land-of-farmers-suicide-too/articleshow/7262739.cms