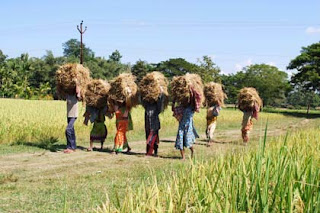 The Crop Prospects and Food Situation report of Food and Agriculture Organization (FAO) released in March, 2011 paints a gloomy picture of world wheat production for the present year. It says that although world wheat production in 2011 will increase by 3.4 percent as compared to 2010 to reach the level of 676 million tonnes, production would still be lesser than the bumper harvests of 2008 and 2009. Prospects for 2011 winter crops i.e. wheat and barley remains favourable for India and Pakistan. Prospects for irrigation based rice harvest are also strong in 2011 for India despite weather irregularities. However, rice prices could soar in 2011 in India.

Crop prospect around the world

Due to the existence of inflationary forces as price signals globally, production side is going to receive strong responses. Increased yield recovery along with more plantings in Russia and Ukraine are expected to increase wheat production. Unlike the United States, larger plantings have been forecasted in Canada. Despite easing of drought situation in North Plain by recent precipitation, uncertainty over wheat production looms large in China.

Significant increase in wheat production is likely to be achieved in North Africa. Yields would return to average after bumper levels in 2010 for Australia and Argentina. Unlike Argentina and Uruguay, prospects of maize production are favourable in Brazil owing to good rainfall. Similarly, prospect for coarse grain production is positive in South Africa, Malawi and Zambia. Japan is going to face setback in rice production in the aftermath of tsunami.

Inflationary forces are keeping international prices of cereals buoyant. Wheat prices are likely to skyrocket due to widespread hoarding. Higher prices of wheat, rice, sugar and dairy products pushed the FAO Food Price Index – a measure of basic food prices at the international level to 236 points in February, up 2.2 per cent from January, the highest record in real and nominal terms, since the Rome-based agency started monitoring prices in 1990. The Cereal Price Index, which includes prices of main food staples such as wheat, rice and maize, rose by 3.7 percent in February (254 points), the highest level since July 2008. World Bank’s food price index, rose by 15 per cent between October and January and is now only 3 per cent below its 2008 peak.

The key challenges before world agriculture as identified by the United Nations are: soaring prices, weather-related disasters such as droughts, floods and fires, political changes and instability that are disrupting food supply chains and under-investment in agriculture.

Global wheat production to increase in 2011,

Govt may lift ban on export of wheat by Sanjeeb Mukherjee, The Business Standard, 12 March, 2011,