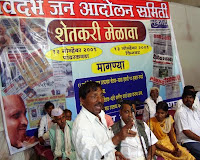 It is usually believed by the scientific community that transgenic varieties of plants can bring about agri-revolution in the so-called developing and third world countries, which depend on food and developmental aid due to shortages and famines. Biotechnology has made it possible to grow more crops, hence, making countries of the South more self-dependent. Same is the message of a new study titled Bt Cotton in India: A Country Profile by Bhagirath Choudhary and Kadambini Gaur (July, 2010), which shows that small and marginal resource-poor Indian farmers are increasingly adopting Bt cotton so as to derive better yields and more profits. Statistics provided in the report indicates that 5.6 million small and marginal farmers in India during the year 2009 planted and benefited from 8.381 (~8.4) million hectares of Bt cotton, equivalent to 87% of the 9.636 (~9.6) million hectare national cotton crop. The usage of Bt cotton has increased due to better yields, rise in production and reduction in the application of insecticides. Within a span of six years from 2002 to 2008, Bt cotton has generated economic benefits for farmers to the tune of US$ 5.1 billion.
During the last 8 years, application of Bt cotton in India has resulted in doubling of yield from 308 kg per hectare in 2001 to 568 kg per hectare in 2009.
The number of farmers growing Bt cotton hybrid has increased from 50,000 in 2002 to 0.56 crore farmers in 2009. The report tells us that farmers prefer multiple genes over a single gene Bt cotton hybrids because multiple gene Bt cotton hybrids provide additional protection to Spodopetra (a leaf eating tobacco caterpillar) while it also increases efficacy of protection to both American bollworm, Pink bollworm and Spotted bollworm.
The report informs that 65% of India's cotton is grown on dryland and 35% on irrigated lands. In the year 2008, Maharashtra, the largest cotton-growing state, had 2.15 million farmers growing cotton, which occupied approximately 34% of India’s total cotton area.
Due to the conducive biotechnology policies of the government, which allowed private sector participation in R&D and sale of hybrid Bt cotton, area under Bt cotton production in India increased from 50 thousand hectares in 2002 to 8381 thousand hectares in 2009. In 2006-07, India overtook the USA to become the second largest cotton producing country in the world, after China. In 2006, India’s Bt cotton area (3.8 million hectares) exceeded for the first time, that of China’s 3.5 million hectares, the report mentions.
As a result of increased use of Bt cotton, exports of cotton increased from 0.05 million bales in 2001-02 to 3.5 million bales in 2008-09. Due to the boom in cotton production during the last eight years, India could become a net exporter in cotton.
Based on the literature survey of various individual studies, the report paints a rosy picture of how Bt cotton economically benefitted the farmers. The report, however, remains uncritical about the way Bt cotton adversely affected the farmers leading to suicides being committed, and loss of biodiversity. There are studies, which show that yields do not rise necessarily due to growing of Bt cotton. The quality of the cotton grown is poor in the case of Bt cotton. It provides little resistance to Pink bollworm. The economic advantage of growing Bt cotton is over-exaggerated. The present report tries to hide the fact how many of the seed companies are extracting huge royalties by selling the genetically modified seeds at higher prices to our farmers.
Further readings:
Bt Cotton in India: A Country Profile by Bhagirath Choudhary and Kadambini Gaur, July, 2010, http://www.isaaa.org/resources/publications/biotech_crop_profiles/bt_cotton_in_india-a_country_profile/download/Bt_Cotton_in_India-A_Country_Profile.pdf
Background Note on Bt Cotton Cultivation in India, http://www.envfor.nic.in/divisions/csurv/geac/bgnote.pdf
Bt Cotton or Better Cotton? by Kunal Dutt, http://www.ccsindia.org/ccsindia/policy/glob/studies/wp0008.pdf
Bt cotton has failed admits Monsanto by DC Sharma, 6 March, 2010,
http://indiatoday.intoday.in/site/Story/86939/India/Bt+cotton+has+failed+admits
Bt Cotton is a Failure by Dr. Suman Sahai,
http://www.genecampaign.org/Publication/Article/BT%20Cotton/BtCotton-is-failure.pdf
The story of Bt. Cotton in Andhra Pradesh: Erratic Processes and Results (February, 2005), Centre for Sustainable Agriculture (CSA), http://www.grain.org/research_files/Story_of_Bt_Cotton.pdf
An odd royalty calculus by Latha Jishnu, The Business Standard, 24 June, 2010, http://www.business-standard.com/india/news/latha-jishnu-an-odd-royalty-calculus/399194/
Cotton farmers opt for double-gene Bt technology by Harish Damodaran, The Hindu Business Line, 25 July, 2010, http://www.thehindubusinessline.com/2010/07/26/stories/2010072651811300.htm
Farmers earn more from organic cotton: Survey, The Hindu Business Line, 16 June, 2010, http://www.thehindubusinessline.com/2010/06/17/stories/2010061751791700.htm
Bt cotton seed firms tell states to end price control by B Krishna Mohan, The Business Standard, 9 June, 2010, http://www.business-standard.com/india/news/bt-cotton-seed-firms-tell-states-to-end-price-control/397519/
Bt cotton ineffective against pest in parts of Gujarat, admits Monsanto by Priscilla Jebaraj, The Hindu, 6 March, 2010, http://www.hindu.com/2010/03/06/stories/2010030664831400.htm
Posted by shambhu at 1:50 PM