MGNREGA in Dungarpur, Rajasthan under scanner 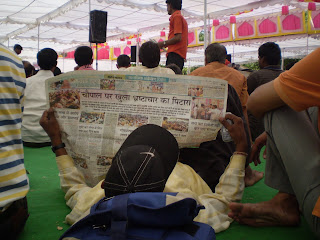 The District Administration of Dungarpur has found embezzlement of MGNREGA funds in many of the road construction work and other activities. A sum of Rs. 58,35,766 has been recovered from the Jharni Gram Panchayat, which comes under the Simalwada Panchayat Committee. A monitoring and evaluation team was formed under the District Collector Purna Chandra Kishan to check mismanagement of MGNREGA funds. The team has been looking into the technical and accounting aspects of the work done so far. It has been learnt that more funds are likely to be recovered from the former Sarpanch and the contractors/ suppliers.

The District Collector Purna Chandra Kishan has informed that during the evaluation, it has been found that the work done under MGNREGA have not been done as per the rules. The 2 monitoring teams sent have found that in 16 different work, that amounted to Rs. 63,26,110, payments were made without getting the requisite material from the contractors and without the work being completed. Vouchers were fudged and contracts for supply of materials were given to near and dear ones. The evaluation team has accused Jaisha Bhai Domar, Manilal Prapat, Maganlal Baranda and Gautamlal Baranda for making payments to the contractors without getting the construction material.

The evaluation report has mentioned the names of Ramlal Domar, Pankaj Kumar, Shantilal, Manoj Aamliya Rastapal, Hemant Kumar Shah, Shakarlal and Mansingh Domar from whom the siphoned off funds of MGNREGA would be recovered.

The Collector Purna Chandra Kishan has given the instruction that if funds are not repaid back within a week, FIRs would be made against the accused i.e. the former Gram Sarpanch and the suppliers.

12 FIRs in Bhilwara after social audit of NREGS, 12 October, 2009, The Times of India,
http://timesofindia.indiatimes.com/city/jaipur/12-FIRs-in-Bhilwara-after-social-audit-of-NREGS/articleshow/5113274.cms

NREGS under scanner in Bhilwara by Sunny Sebastian, The Hindu, 10 October, 2009,
http://beta.thehindu.com/news/states/other-states/article31998.ece#

NREGS audit a relief to poverty-stricken by Narayan Bareth, The Asian Age, 12 October, 2009,
http://www.asianage.com/presentation/leftnavigation/news/india/nregs-audit-a-relief-to-poverty-stricken.aspx
Posted by shambhu at 10:20 AM