Looking back at the Mumbai episode 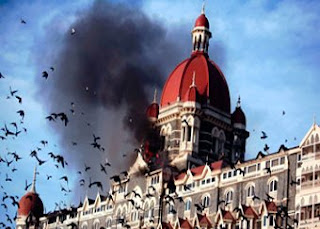 It was during one of the television shows telecasted in late November, 2008, a group of media persons from Pakistan wanted to make the point that the terrorists killed and nabbed during the Mumbai terror attacks were actually Indians, and not Pakistanis. This is long before the Indian government produced evidences that the killers took birth and got trained in Pakistan. However, the media journalists from Pakistan projected as if the terrorists belonged to right-wing Hindutva organizations, who were quite critical and disenchanted about the so-called brand image of the Bhartiya Janata Party (BJP) and other such organizations. But, why did they do so? May be it was their first natural reaction to defend Pakistan, when everybody in the world could watch what was happening to Mumbai.

The question is: Can we really say that the Pakistani media was cooking up the story against India? We must look at the situation in a different way. Indian coast guard has till now been considered as pretty strong. Evidence: They fought against Somalian pirates in the Gulf of Aden, which is near the African coast and saved the lives of those who were abducted by the pirates. This was the news, which captured the attention of international media during November 2008. The pirates were actually poor Africans who bought illegal arms, indulged in hijacking ships and asked for ransoms. Hence, the terrorists from Pakistan could not have taken the sea route, if they had considered the Indian coastguard to be strong enough to ensure India’s national security. This is quite contrary to what really happened. But the Pakistani media reiterated that the terrorists could have been from India. Moreover, the present President of Pakistan's own wife i.e. the former PM Benazir Bhutto, herself got killed by terrorists during the year 2007. Mr. Asif Ali Zardari does not have a sound track record since he was in jail in the past on numerous occasions. He was alleged to be a corrupt leader. In that case, one might doubt him. We all know that the entire South Asian region suffer from gender biasness. But how can we leave our beloved Mr. Musharraf--the Great Dictator?

Let us now come back to the Mumbai episode. It must be told here that the terrorists knew the entire blueprint of Bombay, Taj Hotel and the Nariman corner quite well, beforehand. They fought like commandos against the National Security Guards. That's why they could kill so many people and ripped apart the very souls of the innocent Mumbai-ites. The last point that I would like to mention is that the erstwhile supporters of BJP/ VHP i.e. the ex-Army men and the God-lady Pragya--were being investigated by the top cop Mr. Hemant Karkare, who got killed by the terrorists during those attacks. The problem arose when BJP’s top leader LK Advani was trying to save these people, the same crooks who planned to kill some of the BJP and Sangh giroh members. The ex-Army men and Sadhvi Pragya considered many of the leaders from BJP as softliners, whom they wanted to finish. In fact, the Sangh because of making lewd comments on religious minorities chucked out these guys. Later, they were investigated for their alleged role in Malegaon blast. Instead of politicizing the issue, let us think about the terror issue in a pragmatic way, once again. Terror has no religion. A secular Indian neither supports Hindu terror nor Muslim terror. He does not need to. But what about VHP (Vishwa Hindu Parishad) and BJP supporters who raped a nun in front of a Father of the church in Orissa recently, and paraded them nakedly? Yes, I am talking about Kandhamal. Can those goons be termed as terrorists? Suppose, they would have done the same thing to the womenfolks who were Hindus, what would have been our reaction? Would one still go on to support them? History taught us that it is only the fascists who use religion to come to the power. It is only the fascists who blame other countries or communities for the wrongs happening within his/ her/ their country so that he/ she / they can carry on with the grand plan of war mongering. It is easy to talk about war but difficult to promote peace. People like Einstein, Gandhi are still remembered because they were pacifists when they were alive. Godse, who killed Gandhi, himself belonged to the Sangh Parivar. A democratic political party would always raise issues related to development, poverty reduction and policies to reduce unemployment. Remember, the elections are near. It might happen that BJP (and people like Narendra Modi) is pointing its finger towards Pakistan because of the dastardly act that happened in Mumbai in order to promote its own ideology of cultural nationalism. We all must remember the Gujarat pogrom when Mr. Modi was the CM. During the times of BJP, adivasis were killed, raped and looted. That is what had happened in Orissa. They even killed the military personnels, who were deployed to protect the adivasis. The Mumbai episode simply points out that this time the terrorists were from outside and not from India.